It’s been thirteen years since we last hit the football field with Mario and his friends on the Nintendo Wii. With Mario Strikers: Battle League Football on Nintendo Switch, we now have the ability to spin balls and objects across the field again.

When you first play the title, you immediately notice which aspect the developers have focused on in Mario Strikers: Battle League Football. As with its Battle League Football predecessors, the multiplayer mode is once again at the fore on the Switch. Either on a console or with an active Nintendo Switch Online membership against distant soccer players, we can go goal hunting with up to eight other players. The action-packed soccer matches await us again, where there are no complex, realistic rules other than scoring the most goals. 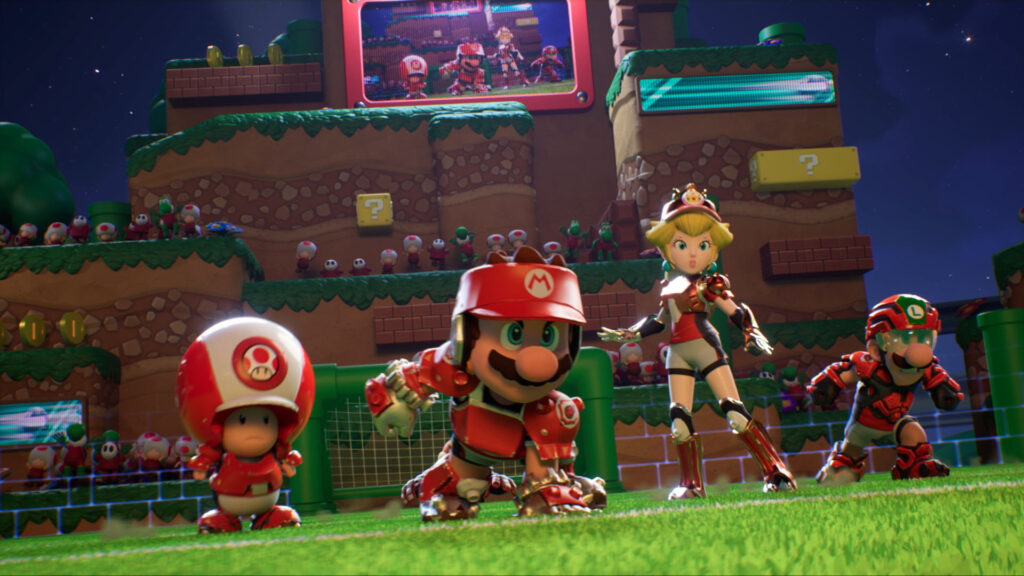 If we don’t have any friends around and can’t use the online feature or don’t have an active Nintendo Switch Online membership, we only have the cup mode in addition to quick individual matches. As the name suggests, there are quite a few trophies waiting for us in this, which we have to complete in the best possible way. We will play a small tournament against a number of other teams in each of these cups. We can also play these tournaments in cooperation. In addition to the cups, we get coins, which are only used to buy new equipment. Unfortunately, this already outlines the full range of options for single players. The motivation for individual players is lost very quickly, precisely because the tournaments offer little challenge.

Online, the game offers much more depth and many different modes. We can join or create a Strikers Club with up to twenty other players. When we establish such a club, we decide on a home stadium, the color of the clothes and even our own club logo. In these clubs we play against other clubs in a league system for points that determine promotion and relegation. The question is why there is not such a creative mode as a single player campaign, which would significantly increase the motivation.

Where are the players? 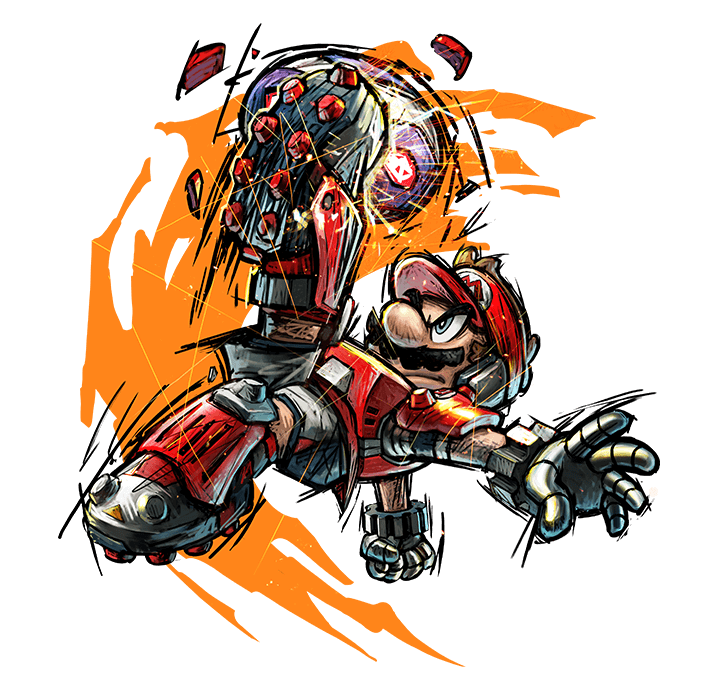 The player selection consists of the usual suspects. In addition to Mario, Luigi, Yoshi and Peach, Bowser, Warluigi and Donkey Kong also return to the football field. Rosalina also laces up her football boots for the first time. Two of six characters have recently been released, Daisy and Shy Guy, which will be added as part of free updates. Unfortunately, the games often feel the same when choosing. With the exception of Hypershot, none of the players available have a real unique selling point. The teammates from the previous offshoots no longer exist, and the basic tactical formation of our team is always dictated by the game.

Of course, the players display the usual characteristics: Mario is an all-rounder as always, Bowser fires hard shots but moves slower, while Peach can move more easily but has weaker firepower. In Mario Strikers: Battle League Football we have the opportunity to influence the different values ​​for the first time. With the equipment acquired through coins, we can actively influence the various properties. This brings a piece of strategy into the planning of the teams. 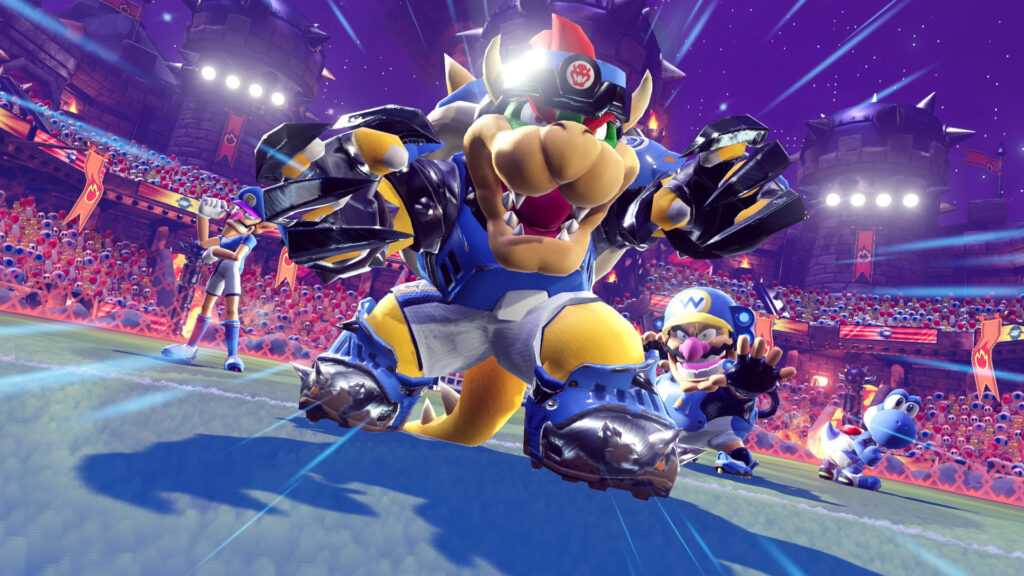 The venues in Mario Strikers: Battle League Football are a special feature unlike its predecessors. Before the game starts, we decide our half of the pitch for our team in addition to a jersey color. Before we enter the football pitch, these two halves of the stadium – ours and the opposing team’s – are put together. However, neither the stadium nor equipment color affects the gameplay and is only visual in nature. A little more variety would be desirable, especially in the stadiums, since there are no obstacles waiting for us like in the predecessors.

Mario Strikers: Battle League’s gameplay adapts in a more in-depth way and is essentially reminiscent of Game Cube spin-off Smash Football. We learn the new basics in a very detailed tutorial that lasts about half an hour. Each of our actions like tackles and shots will improve if we perform the action with the right timing. Teams no longer have secondary players, all team members have the same actions. The team gets help from a boom-boom goalkeeper who has taken over Kritteren’s place. 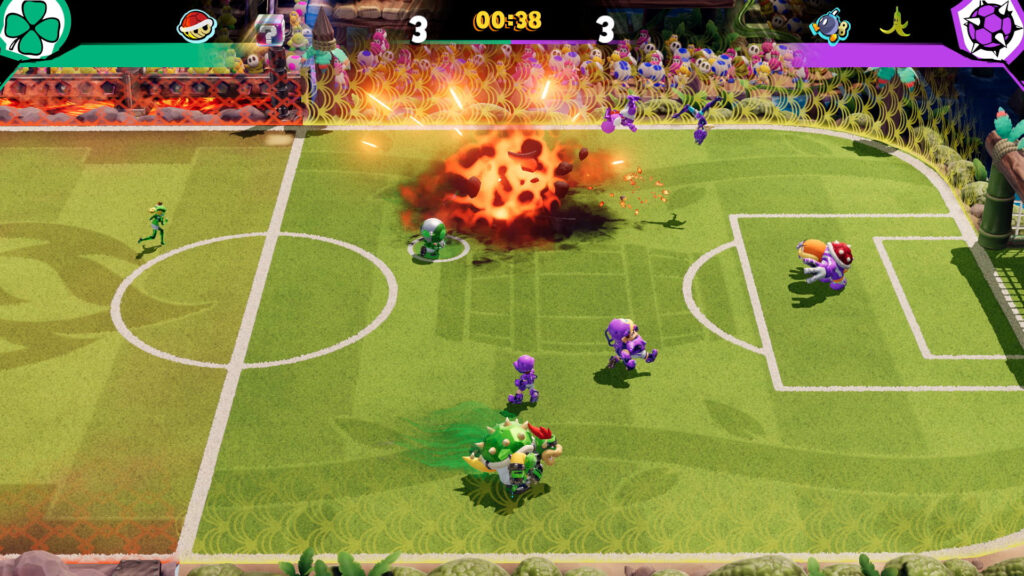 In addition to the usual items – such as mushrooms, stars and banana peels – that are thrown by the crowd this time to support the teams, the occasional hyperball appears. The team that collects these can perform the Hypershot. For a certain amount of time, all members of the team light up, and after a fully charged shot, a series-familiar display starts. If we stop them twice at the right moment, we will unleash a powerful shot with a nice animated sequence that will guarantee us two points. If the display is not completely hit, the goalkeeper still has the option to parry it.

The aspect where Mario Strikers: Battle League Football is most convincing is the technique and presentation. As in its predecessors, the art style is wonderfully implemented and the characters once again have charming and playful animations. It doesn’t matter if it’s handheld or docked mode, the game runs smoothly with a few exceptions and the colorful comic graphics really come into their own. Let’s hope that in addition to the good technical implementation, more will be achieved in terms of scope in the future.

Since the announcement of Mario Strikers: Battle League Football, I have been very happy to finally be able to play exciting football matches with Mario and Co. again. Unfortunately, I am disappointed with the final state. As entertaining as the combat is designed, the game feels unfinished in many places – especially in terms of scale. Few characters available and hardly any single-player content doesn’t exactly provide much motivation. The focus is very clear in online mode, which offers significantly more content. Apart from the deep gameplay and charming animations, Mario Strikers: Battle League Football offers a solid gameplay experience that will hopefully be expanded with more modes in the future, and not just characters and equipment that could have been included at release.