27/05/2022 | (rsn) – Richard Carapaz (Ineos Grenadiers) wants to win the 105th Giro d’Italia by very old means. On the one hand, it’s smart, on the other hand, it’s extremely boring for all viewers. This Giro will also be the indicator of whether an innovative understanding of cycling is successful or whether conservatism wins.

Carapaz looks nervous. He still wears the pink jersey after the 19th stage – and he does not wear it undeservedly, it is clear. But he does not look very happy. When an Italian journalist spoke to him in the press center about smiling much less than usual at this Giro, only a tormented half-smile flew over the Ecuadorian’s face. He waved it off and left the press conference without answering. That was also the last question, so no scandal.

___STEADY_PAYWALL___ But the man in maglia rosa with the Ineos logo has changed. Of course, Carapaz can feel the burden of responsibility. He will now deliver to cycling’s Real Madrid. And the last three weeks have made it clear that he has to deliver under completely different conditions than the Sky and Ineos captains before him, who were several tour winners. Whether they were named Chris Froome or Egan Bernal, they were by far the strongest climbers in the field. And they could always count on the strongest team around them. 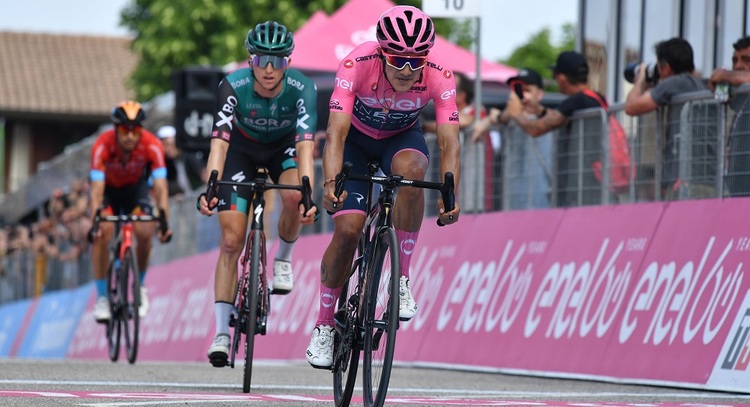 In the order in which Richard Carapaz, Jai Hindley and Mikel Landa finished stage 19, they also occupy the top three places in the overall standings in this Tour of Italy. | Photo: Cor Vos

The Ineos squad in this Giro, on the other hand, has been thinned out. No mega-engine like time-driving king Filippo Ganna pulls the mountain train. No. Michal Kwiatkowski ensures coolness and extra ideas. Carapaz did not even get the phenomenal young Thomas Pidcock by his side.

Carapaz is not a bit stronger than the challenger Hindley

In light of the stifling power of the subdued Ineos, it’s also clear that Carapaz is not one watt stronger than his worst challenger Jai Hindley (Bora – hansgrohe) and at best slightly better than the basker Mikel Landa (Bahrain Victorious. No one knows better) than Carapaz himself: “We are all three on the same level,” he says obediently as soon as there is a microphone in front of his nose.

And because that’s the case, the rather impulsive professional cyclist resorts to very classic means: he becomes a minimalist. To the maximum minimalist even. Because he owes his currently three-second lead over Hindley to the least heroic act imaginable for tour kings. These are bonus seconds from a middle sprint. 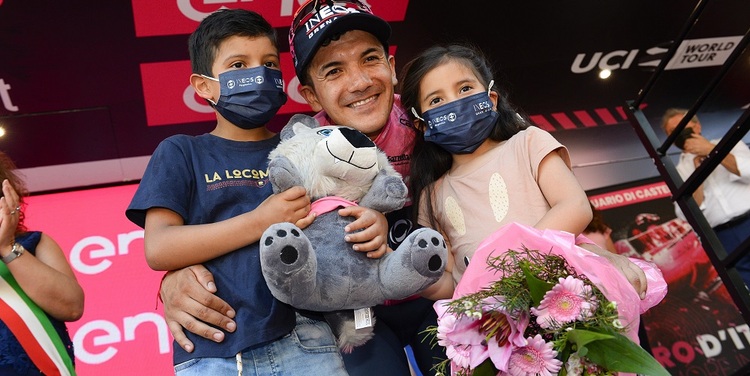 On the podium, Carapaz had a good laugh with his two children, Santiago and Sofia. | Photo: Cor Vos

If he is asked about it, a faint smile plays on the lips of the man with the number 1. “This Giro is settled in seconds,” he says then, as if it were a matter of centuries-old wisdom from the Andes. , long before Columbus’ predatory Descendants swept the region with murder and terror in the name of the church and civilization.

You have to give him the credit for being, unlike his teammates, wide awake on the Giro’s key stage so far. The 28-year-old was further ahead in the field on Saturday when Bora – hansgrohe launched a nice collective attack on the Torino stage. Carapaz even used the Bora show as a ramp, but was then brought back by Hindley and was then content to roll into the pink jersey as a recipient of Raublinger ideas.

But all this does not do his image any good. After all the exciting, sometimes legendary trips in Italy in recent years, the Olympic champion appears as a very boring spectacle damper. It also wiped the joy from his face. Carapaz has to drive differently than his racing heart tells him. His greatness lies in not listening to his heart, but to his head. He drives Ineossiger, more Sky-like than before Froome or Bernal.

This is a stark paradox. Because Ineos has noticed a character change in recent years. Giro 2020 was won by being aggressive. The classic campaign this year was amazing with its ideas and successes. A rather weak team – compared to the old days – and a leader of poor outstanding goals led to a relapse into cruise control times, which was thought to be in the past.

Ineos Grenadiers did not necessarily provide their Giro captain with the first team of assistants. | Photo: Cor Vos

One can regret the low spectacle value. But one can also recognize that Carapaz draws the very right conclusions from the overall situation. Whether that will be enough for his second overall victory in the Giro after 2019 is not known until Sunday, which by the way is Carapaz’s 29th birthday. Only the innovative power of Bora – hansgrohe can conquer it.

Such a result would be good for cycling. For it might also convince Carapaz in the future to listen more to the heart of his racing driver than to the minimalist mind.