It was day 1 of the 50th edition of the 24 Hours at the Nürburgring! Tomorrow we meet live from the ring again. Until then, good night!

The sessions are over, the best time of day is still with the Rowe-BMW # 98 (Catsburg / Edwards / S. Van der Linde / Wittmann). The most important news is that there were no serious accidents on the opening day. The teams will now prepare the vehicles for Friday.

Although not much is happening at the top of the schedule, there are still isolated dramas. Phoenix-Audi # 5 (V. Kolb / Stippler / Feller / K. van der Linde) passed straight start / finish with a puncture, while Black-Falcon-Porsche # 121 (Harkema / T. Müller / Nagelsdiek / Scheerbarth), third place in the Cup2 class, in the Hohe Acht section after a technical defect.

The times at the top seem to have burned in. For the most part, the drivers run their obligatory laps in the dark. However, there are still some improvements. Christopher Mies in Car Collection Audi # 24 (P. Kolb / Drudi / Mies / Niederhauser) has just finished P15 and set an absolute best time in the seventh sector. Or, as the livestream commentators like to say: Purple.

Now it hits the Falken Porsche # 44 (Bachler / Picariello / Pilet / Ragginger), which is currently in 23rd place. Cause: overhaul under yellow flag.

Meanwhile, Car Collection Audi # 23 (Fetzer / Koch / Reicher / Marschall) gets its best lap time canceled due to driving too fast under code 60. Since Audi is already qualified for TQ2, it does not matter.

Walkenhorst-BMW # 102 (J. Müller / M. Von Bohlen / Tuck / Schmidt-Staade) will start the race from the end of the first starting group. But that is not the sanction for the accident with Huber Porsche # 25 (Thyssen / Rader / N. Menzel / Kern) before. The offense was exceeding the maximum speed under code 60 of five km / h.

The BMW M4 GT3 was already one of the vehicles pre-qualified for the TQ2. It remains to be seen if that will be resolved at all. Here is the collision from before.

The KTM X-Bow GT2 once again lives up to its reputation as a GT3 thriller. # 116 (Kofler / Siljehaug / Hofer / Heinemann) is 4,614 seconds behind the drivers in tenth place.

Criticism of Octane126 and what’s in it

In a pre-race press release, the Swiss Ferrari team Octane126 complained, among other things, about an unfair classification in the Balance of Performance (BoP). We talked to the team and looked at the rankings for the Ferrari 488 GT3 over the last two years. You can find Heiko Stritzke’s analysis here. The article also provides exciting background information on remodeling the car.

Time improvements are currently not possible because the recovery of the # 25 Huber Porsche that had an accident is still underway in the Wippermann. So there is a code 60 phase there.

“Things are looking pretty good for the BMWs so far,” says Sheldon van der Linde from the leading Rowe BMW # 98. “But I think the cards will only be put on the table tomorrow. The M4 feels good and is probably the best car I’ve ever driven. We’ve made some progress over the last two weeks. The mood at Twilight “At Brünnchen you can smell the grills, see the fans – and it’s just amazing.” 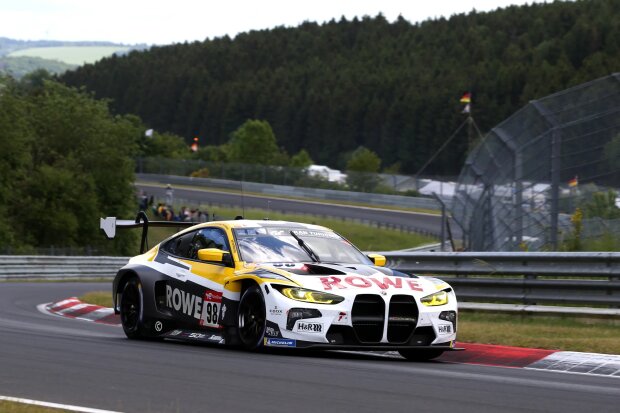 Marc Basseng explains why his teammate Manuel Lauck left the track at the beginning of training with the Hyundai Elantra TCR # 830 on the Grand Prix track: “Front left suspension broke in the NGK harassment. There is a new ‘Sausage’ cure and Manual Understood. “

Huber-Porsche # 25 (Thyssen / Rader / N. Menzel / Kern) collides with Walkenhorst-BMW # 102 (J. Müller / M. Von Bohlen / Tuck / Schmidt-Staade) in Wippermann, turns and hits a crashed barrier. The journey is over for Porsche, Ben Tuck can continue in the BMW. It was a classic misunderstanding. Tuck wanted in, Rader closed the door.

After the turbulent initial phase, things have calmed down and the teams are embarking on their program. Sector times keep flashing pink on the time monitor, but the BMW trio # 98 Rowe, # 101 Walkenhorst and # 20 Schubert are ahead. The first pursuer is # 28 Dinamic Porsche (Engelhart / Cairoli / Ledogar / Preining).

But the fourth place for Aston Martin did not last long, for Jesse Krohn improved to third place at the wheel of the Schubert-BMW # 20 (Krohn / Sims / Klingmann / Krütten). There is now a BMW trio at the top.