Actually unthinkable that Mario Strikers Charged Football was released only 1.5 years after Mario Smash Football because the sequel has changed markedly. The first title appeared in the late Nintendo GameCube era, the sequel was released six months after the introduction of the Wii console. It was then the first European title to support the Nintendo Wi-Fi Connection feature that made it possible to play games online. Although the online servers are now unfortunately offline, we are investigating whether the title is still fun to play in local mode today.

On the whole, the game is similar to its predecessor, which also excelled with fast and sometimes brutal 4-on-4 football games without rules. As usual for a title released for the Wii in the early years, the Wii controllers were used with the Wii remote and the Nunchuk controller. To the surprise of many players, the motion controls work really well in this game. The Wii remote is used in two situations: in the blood tackle, which you can do at any time by shaking the remote, and to repel special shots, which in this game are called mega-shots. In itself, the controls are super intuitive, and you get used to them relatively quickly, even after switching from the GameCube jumper.

An innovation includes the character selection, because in addition to four new captains, four new teammates have been added. Among the captains is Bowser, who was present in the predecessor but not playable. In this title, the teammates, including their position in the row, can be selected individually, and unlike their predecessor, all three do not have to be identical. The teammates are now much more useful and all have their own defensive ability and also a special shot that can be fired by leaving it with the shot button. Buu-Huu, for example, can become invisible through the dodging movement to avoid the enemy attack, Bone Dry can briefly paralyze the goalkeeper with an electric shock with his special shot, so he can not parry subsequent shots. In general, it’s fun to switch between characters and try different tactics. The defensive ability of Waluigi or Bone Dry, for example, is somewhat strong, allowing the character to teleport past the goalkeeper into the goal if placed correctly. Due in particular to these skills, the balancing is somewhat unbalanced in the finished game. 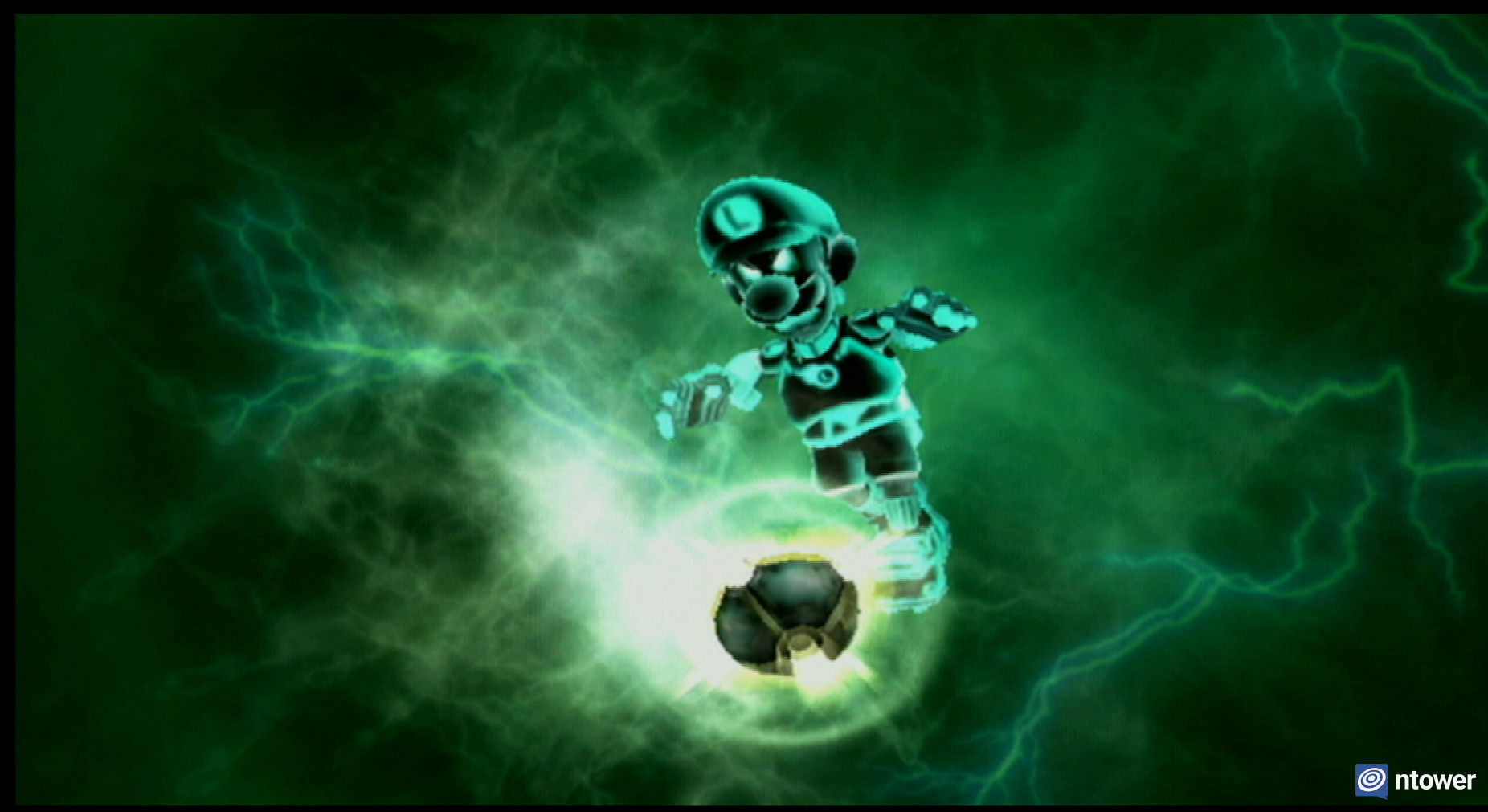 The mega-shots are a bit reminiscent of exaggerated Japanese anime.

The captains, however, have one advantage: They can perform the mega-shot, which, like their predecessor, can be triggered by a quicktime event. Unlike its predecessor, where the goal counted twice, 3 to 6 balls can be thrown in the direction of the goalkeeper. The other player must then ward them off one by one with the Wii remote. Depending on how well the quicktime event was conducted, the goalkeeper has a longer or shorter reaction time. However, it is a bit of a shame that up to six goals can be scored with one shot. The animation of Mega Shots is right over the top, but in a good way. The characters fly the ball up several dozen meters and then slam the ball into goal with glowing eyes.

Each of the captains also shines with a special object, which for example makes Mario really big, Bowser spits out the flames or Wario inverts the opponent’s control of his fart attack. All of these special items provide the extra distinction between the individual characters, even though they did not appeal to me particularly in the game, and I prefer the standard elements.

Many sensible improvements to the predecessor

In the predecessor there was no significant difference between the individual characters, in Charged Football they differ more clearly from each other. Only the characters with strong shots can hit the target at a long distance, for example Toad tries to get a strongly charged shot from midfield into goal, it does not even reach the goalkeeper, a strong shooting character like Bowser or Hammerbrother can effectively hit the ball with a little shot charge forward gate. For example, if the shooting parameter is high, other traits will be lowered in return. So these characters are often very slow and not as tricky as, for example, Toad. The essence of the game is the modification of the team with characters of different strengths. Ideally, the shot should be set up by difficult candidates, where the shot on target is made by a character with strong shot parameters. Over time, you know the strengths and weaknesses of the individual characters by heart and can then use them well and counteract them. 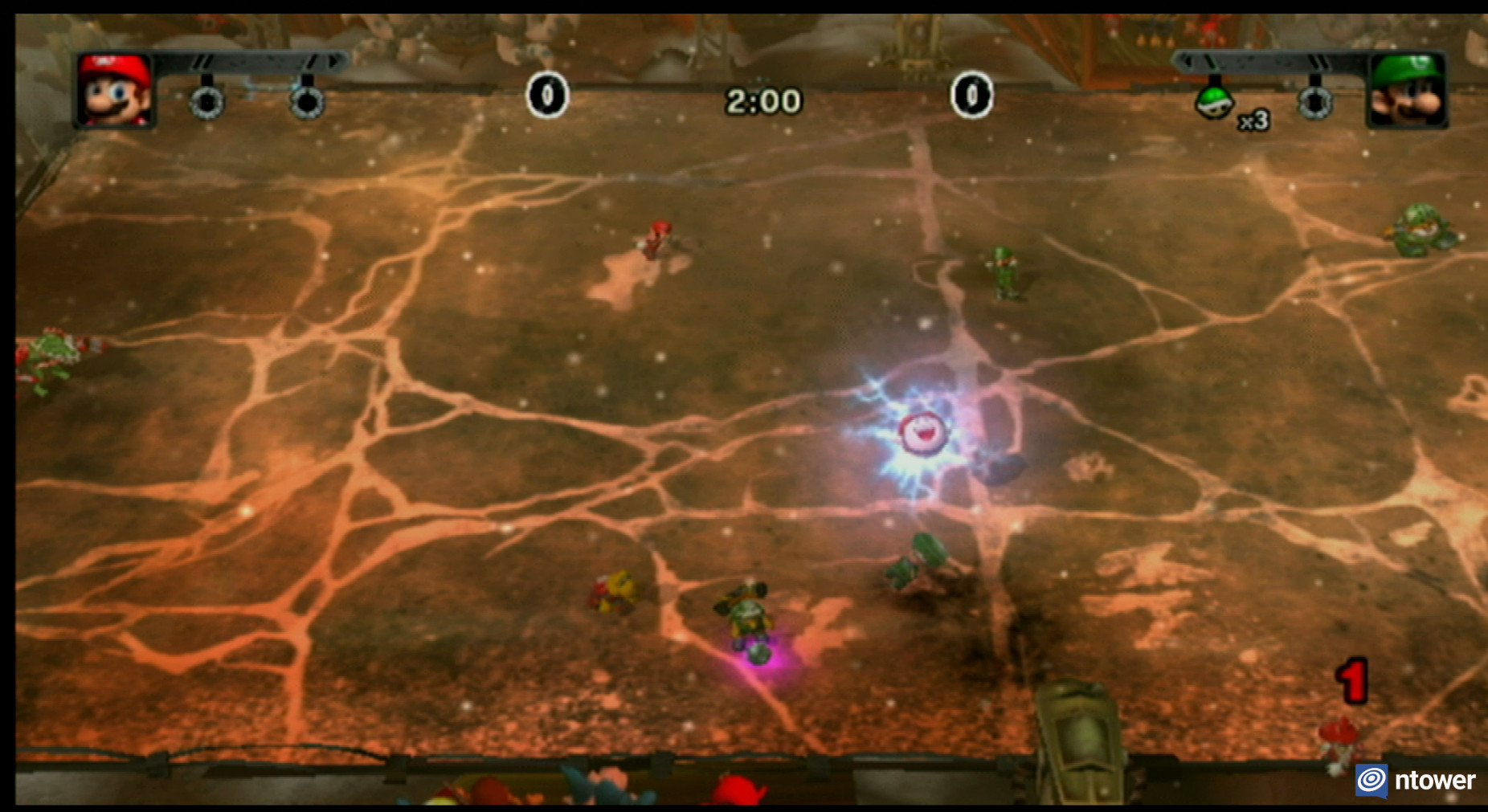 The electric fences are back, paralyzing pressed opponents and thus providing tactical advantages.

The game is named after the charged mechanism that is essential to a successful game. The ball must be charged by passes, shots or assists. This is visualized by the changing color of the ball. When not charged, the ball is purple and then turns red, orange, yellow and eventually white. White balls fly significantly faster and have a greater chance of reaching the finish line. Professionals also charge the ball with charged shots, which are passed on as a pass just before the shot button is released. Assists where the ball is presented forward with the Z key can also charge the ball. Overall, the game is much more tactical than its predecessor and includes more in-depth control options.

There is also a much larger selection of game modes than in previous games. First of all, the training camp was expanded so that the instructions can no longer be seen as video, but the game can also be learned in ten lessons. In this way, all control options can be trained. Besides that, there are other single player modes such as Domination Mode, which includes individual free play, or Path to Strikers Cup, which is actually the game’s single player mode and the only way is to unlock the three unlockable characters and a number of stadiums. A total of three cups are played in a row, and the difficulty level of the characters becomes more and more challenging for each cup. It is not necessary to win every match because a group placement is determined at the beginning, only then is the knockout round played, and after defeating the playoffs, there is a best-of-3 match against the champion, who is the unlockable champion. first time character is discharged. Winning the best-of-3 match unlocks this character.

A big party hit even without online mode

In later games in the tournament, the difficulty level becomes extremely difficult and it takes many hours of training to beat even the highest computer players. Overall, however, the computer players are very fair opponents, who are always realistic but especially strong. These also make mistakes from time to time, but the implementation of the computer players in the game is well done. The Striker challenges have been added as a small bonus mode. There are certain situations that can be played here. Be it to catch up on the deficit of 5 goals within a minute or to win the match without being able to use items. I see more potential in the 12 challenges because it was mostly challenges based on the principle “score x goals in y minutes”. Here you could have let go of the steam more creatively with item variations or certain arena gimmicks. If you defeat the challenges, you unlock certain cheat codes for dominance mode. There you can, for example, deactivate mega shots, always keep the ball fully charged, completely deactivate items or limit them to a certain category. This provides an even more fun and varied experience in local multiplayer. 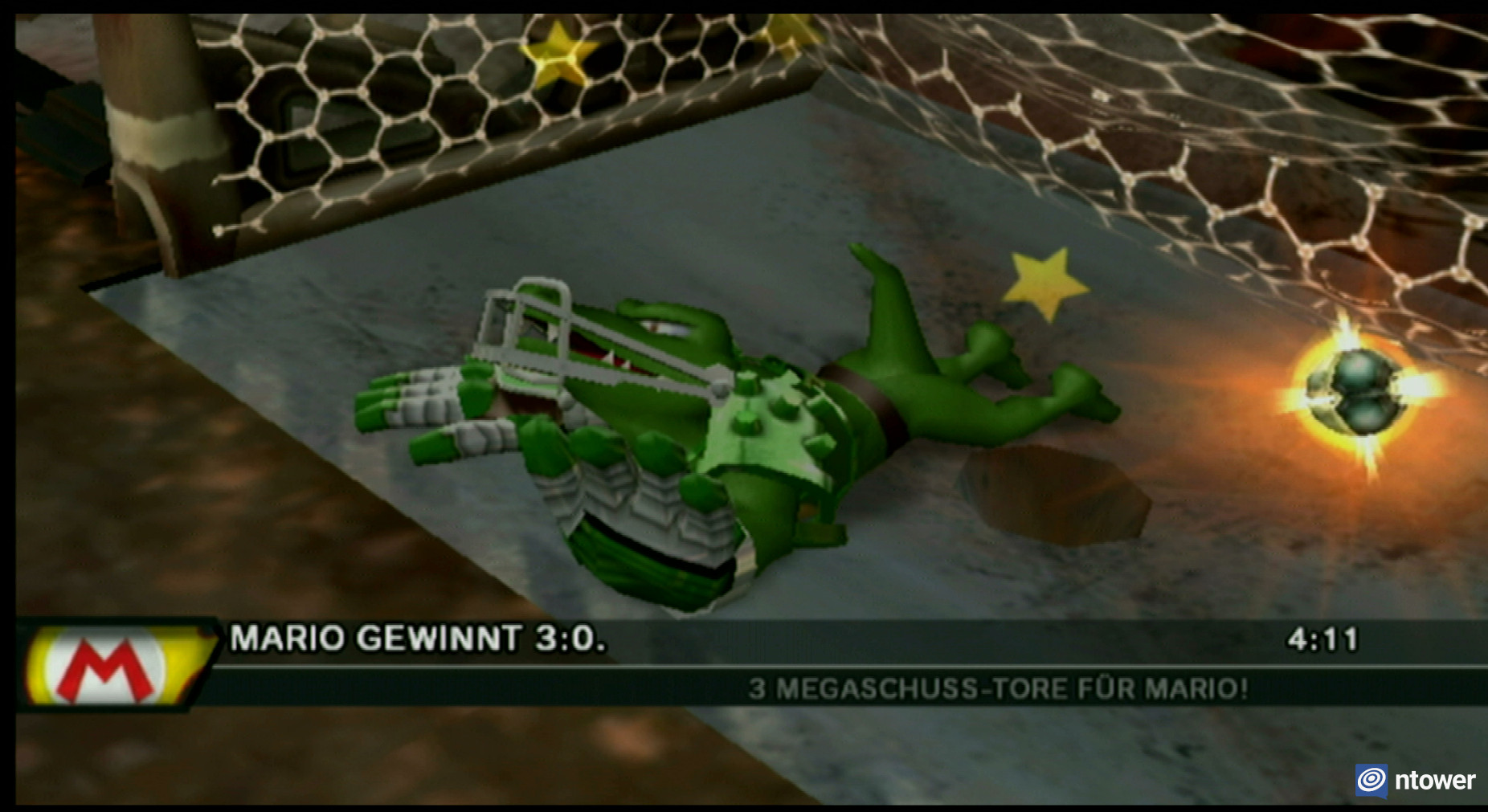 If anyone has to endure a lot, it’s goalkeeper Kritter. Fireballs, electric shocks, explosions: you can really feel sorry for him.

Overall, the game shines especially in multiplayer, which can be played with up to four players on one console. It’s most fun when each team is controlled by a human player. Purely playful, the game excels with at least the same techniques as its predecessor. Flat passing, high passing and the shots are the main actions. The game is really easy to learn, but it takes a lot of practice to master the gameplay. If you hand over a controller to an inexperienced player, they can learn the basics relatively quickly.

A highlight of this game, besides the presentation, which is much darker than in the predecessor and much more emotional than in other Mario sports games, is the musical component. Each character has their own pieces of music, which also differ in genre. Luigi’s soundtrack still brings nostalgic memories to many fans today, as it sounds a bit like a Spanish flamenco style. Whether it’s the electro beats from Peach’s song, the heavy metal tones from Bowsers or even the Southeastern European style from Warios, each character comes with their very own soundtrack. The music plays in the intro sequence before a match or after a goal has been scored. I love the soundtrack in this game and I have to praise the composers for the artistic freedom of all genres.

In Mario Smash Football, the arenas were always the same in terms of gameplay, but some gimmicks were built into certain arenas in the sequel. Whether it’s flying lava balls in the lava pit, braking sand in the desert crypt or the thunderstorm lake, which have characters falling down from the cliff instead of electric fences. The unlockable Crystal Canyon also stands out clearly from all other arenas. In this arena, after the goals scored at kick-off, one or two players from each team are removed at random until the next goal is scored. This gives 2v2 or 3v3 matches. As a bonus, all arenas from the previous game are left, but like in the previous game, they have no special stage gimmicks, but only take over the optics. The arenas also have some pretty great music. In addition to the seven arenas in the previous game, ten new arenas were added. At least there is nothing left to be desired here.