transferKylian Mbappé refuses to fulfill a supposed childhood dream by signing for Real Madrid, instead of breaking his word to Los Blancos and extending his contract at Paris Saint-Germain. In Spain, the 23-year-old Frenchman is also in the firing line of the newspapers.

Kylian Mbappé raises concerns ahead of the CL final

MADRID / PARIS. Real Madrid will also play in the final of the Champions League on Saturday. For the first time since 2018. For the first time since the departure of legend Cristiano Ronaldo. Despite the gigantic knockout phase with historic catch-ups against Paris Saint-Germain, Chelsea and Manchester City in the royal cosmos, participation in the final is at least a minor matter in the meantime – for Kylian Mbappé with her announced stay in the French capital and thus caused rejection of Real, which was no longer considered possible, much resurrection and unrest.

As can be heard, the 23-year-old broke his word to Blancos. Even his mother and counselor Fayza Lamari recently revealed: “We have an agreement with Real Madrid and another agreement with Paris Saint-Germain.”

In March, when Mbappé visited the Estadio Santiago Bernabéu with the Ligue 1 club for the second game of the quarter-finals and went down there, he was celebrated by Real fans with applause and cheers. A kind of foretaste of the future together. And now this: In madridismo, the attacker has evolved into persona non grata within a few days, and the rejection of a possible encounter is soon huge.

The Spanish newspapers are also critical of the world champion’s actions. “You need a lot of class to play for Real Madrid”headlines in the sports newspaper MARCA on Sunday and Mbappé denies this class. “Mbappé betrays Los Blancos and extends with PSG. Kylian sent a text message to Florentino Pérez.”she continues to write.

Sportsavisen AS, also from Madrid, considers: “He loses. Mbappé prefers the money from PSG to the legend of Madrid, extended with the French until 2025. He gets 300 million euros in bonus and 90 million euros net a year. Ten days ago he committed to Florentino, and yesterday he withdrew it with a WhatsApp message. “

“Mbappé destroys the Pérez project for next decade”

EL MUNDO (Madrid): “Huge emotional blow to Real Madrid. Kylian Mbappé, Los Blancos’ most coveted footballer, is extending his contract at PSG until 2025, ruining the Florentino Pérez-designed project for the next decade.”

MUNDO DEPORTIVO (Barcelona): “Mbappé has put an end to this long history: he stays at PSG. Or, which is equivalent to the same thing: he rejects an astonished Real Madrid who still agrees with what happened. A great failure by Florentino Pérez, who sees the player return to stay in Paris.For PSG, this is a win comparable to winning the Champions League, the upcoming topic on which they will continue to spend all their energy.Much more now that they managed to get “Mbappé to give up his childhood dream again as in 2017. However, it may be final. Real Madrid, who are hurt by the player’s behavior in this last phase, may have locked their doors for him for life.”

SPORT (Barcelona): “Real Madrid rested calmly, with a relaxed face and dreamed of Mbappé. Dressed in white, the goals fell. One after the other in a dreamlike fantasy repeated night after night for a thousand and one nights. The Bernabéu always showed up standing and clapping the iconic Frenchman. football player in a loop.Until the bogeyman came (in the case full of banknotes) and with a sudden shake woke the dreamy madridists by shouting at them behind a Freddy Krueger mask: ‘You look at Kylian, but do not touch him!’ It’s about money, lots of money, pornographic sums of money, mountains of money to buy everything there is to buy, and much of what is not. Mbappé does not care about the history of the Bernabéu and Real Madrid with the Europa Cup. is interested in the weight of the zero-jersey.The only thing he thinks about in the two or more years that soap opera and siesta lasted Saturday afternoon was, ‘Who gives me more?’ 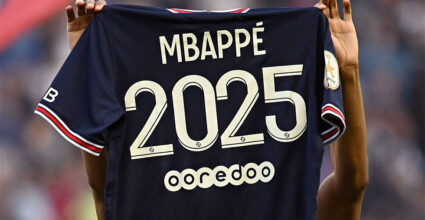 Kylian Mbappé cancels: “What a setback for Real”

FOOTBALL (Germany): “It’s something along the lines of the big plot twist for the season finale, which especially the main actor had led towards with lots of staging. Kylian Mbappé will not switch to Real Madrid for a free transfer, as has long been assumed, but will stay at Paris St. -Germain.

THE MIRROR (England): “Spanish titans Real Madrid were very confident they would have the superstar in their ranks from this summer, when Mbappé’s original contract with PSG expired. A late round has seen the 23-year-old entrust his medium-term future to the Parisians . “

Press reviews: “Mbappé does not care about Real Madrid”

Kylian Mbappé refuses to fulfill a supposed childhood dream by signing for Real Madrid, instead of breaking his word to Los Blancos and extending his contract at Paris Saint-Germain. In Spain, the 23-year-old Frenchman is also in the firing line of the newspapers.