live tickerAs in the first match, Real Madrid can go no further than a draw against FC Cádiz. The second match on the 37th match day ends 1-1 and was not a chance loss. But on both sides, the final consequence was ultimately lacking. Here is the REAL TOTAL live ticker to read.

And that was that! Chances for chances, but on both sides, 2: 1 would not fall. Sometimes Real’s defense misses grossly, even in the form of Éder Militão, who is often misjudged grossly. This game does not win a beauty award, but the focus on the Champions League final weighs heavier in this phase. After all, Eden Hazard has been used for the first time since her leg surgery and is showing signs of vitality.

94 Real are now trying to control the ball in the last few minutes.

92 Latasa gets his first chance from a corner kick. But the header goes over the box

90 After a misunderstanding between Dani Ceballos and Marco Asensio, Cadiz almost had a chance to level the score. But as is so often the case today, nothing comes of it. Nor does Real’s attempt at counter-attack.

87 no Dani Ceballos takes the free-kick, but it is too centered and lands directly in the arms of Ledesma.

86 Real free kick after a foul on Hazard. Is there anything else to come after?

83 Militão decisively interrupts another corner kick from Cádiz striker Sobrino with a header. Otherwise, Spaniards would have had a free path.

80 Substitution: Mariano leaves and Juanmi Latasa from Reals Castilla gets 10 minutes more playing time. This is his first professional assignment.

76 After a free kick by Eden Hazard on Akapo the opponent gets a free kick. Lukas Perez shoots, but his effort was never close to hitting the target.

74 With this variation of chances, Real Madrid are slowly lucky that the Andalusians are not ahead 2-1 yet.

72 Again, Idrissi comes over the left, but when he tries to pull in, the ball is blocked.

69. Great chance for Cadiz! Idrissi brings the ball into the penalty area from the left, Negredo header, but Lunin reacts strongly. Militão shoots at Sobrino as he tries to clear the ball and clears it away.

65 Los Blancos make double substitutions as Rodrygo and Jesús Vallejo call it a day and Eden Hazard and Dani Ceballos come on the field.

62 On the other hand, Marco Asensio’s play is disheartening.

61. But he makes amends for his mistake and keeps the ball, shot by himself!

60. PENALTY FOR CADIZ FC! Next blunder from Éder Militão who completely underestimates a high ball and Negredo can go through. Lunin does not get the ball in time and the referee points to the point.

57 Strong high ball from Toni Kroos, who sees Marco Asensio run out into space. But Asensio has no control over the ball. 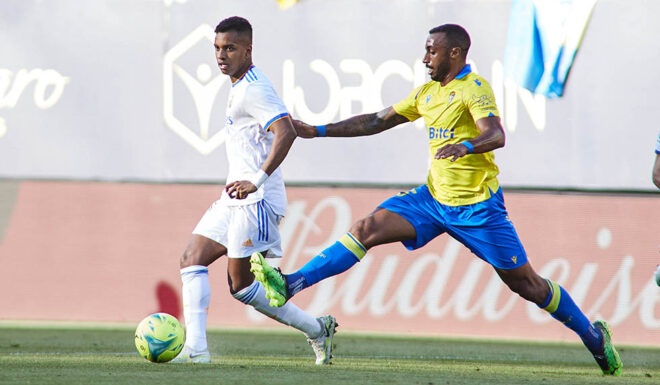 51 Casemiro intercepted with a shot from a central position, but goalkeeper Ledesma also had nothing to worry about.

49 A long throw from Cádiz heads in front of Lunin’s goal. But Sobrino is too surprised and can not turn the ball.

48 First yellow card to Real. Nacho gets up on Sobrino’s foot.

47 Cadiz takes a corner right away, the seventh of the match. Without danger. Fali then pulls from the edge of the penalty area but does not hit the ball properly.

46 It continues at the Estadio Nuevo Mirandilla.

half time! Cádiz missed a couple of chances here, but Sergio González Soriano’s team made too many mistakes in the attack, fortunately for Los Blancos. They could also have scored more than one goal. The problem is the same, lack of precision in the last few moves and some blunders in the defense. Both teams need to step up their game.

45 How lucky for Real! Militão slips in and gives Lukas Perez a chance to run through. Everything is clear in the penalty area, but the striker plays the ball into Negredo’s back.

41 Toni Kroos does it, and Militão tries to head from a sharp angle. It was a little too loud.

40 On the other hand, Real have a free kick after Fali corrects Marco Asensio.

38 And suddenly Real’s defense disintegrates, two chances in a row for Cádiz and suddenly the mood is back.

37. AND THE BALANCE !!! Militão misses and Rubén Sobrino nets! 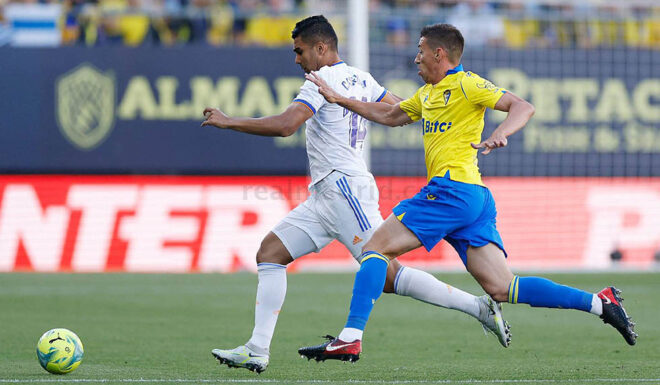 33 If anything, then via Fede Valverde or Rodrygo. Gives first a good pass to the Brazilian who shoots directly but misses the target.

31 After a short drinking break in warm Andalusia, it’s time for the last quarter.

27 Aside from the goal, the Blancos have not been able to put themselves in the spotlight so far. Marco Asensio had the other on his feet and there were two other good opportunities for him which he did not convert.

20 Valverde tried it from a distance, but the shot posed no threat, and Cadiz goalkeeper Jeremías Ledesma was spared.

19 Now Real are slowing down a bit, not letting the opponent get the ball and looking for a way into the dangerous zone.

16 The fighting spirit of the blue and yellows is clearly felt here. Cádiz is not afraid, is strong in one-on-one combat and often tries to finish.

13. And the great chance for Cadiz! Militão loses the running duel against Negredo on the left. The defender in the middle is about to be thrown out of the penalty area by Nacho!

9. Almost 2: 0 from Marco Asensio, who is too imprecise in the end despite a strong left foot.

7. This was the answer to the brave start of the Andalusians. But they try again right away and win a corner. But Militão blocks Rubén Alcaraz’s shot.

5. And 1: 0 !!! GOOOOOL DE MARIANO DÍAZ! It was fast now! Rodrygo bites through the sideline at an incredible speed, soloing into the box and then landing it perfectly for Mariano.

3. Next penalty kick – Real are lucky here as Álvaro Negredo wants to lay the ball down with his back to goal instead of turning and pulling away. So the ball can be cleared.

2. First touch of Cadiz. Lunin has to go. A header from cross is sent off by Carlos Akapo and just past the goal.

1. kick-off! 90 minutes where everything is at stake for Cádiz and Real can test yet another B-Elf. Uden Karim Benzema and Vinícius Júnior. Cádiz plays in yellow and blue and Real as usual in white. 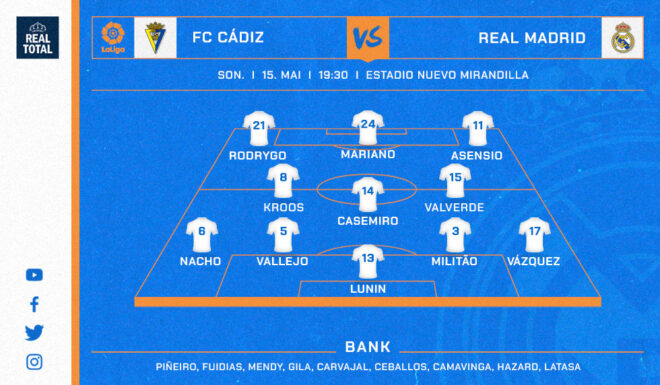 STAFF: This 37th match day also has some rotations in store. A B-Elf Ancelottis participates again, but the good news: not just for injury-related reasons. Among other Karim Benzema, Hat trick scorer against Levante Vinicius Junior and goalkeeper Thibaut Courtois rested. With Marco Asensio, Daniel Ceballos and Daniel Carvajal three of the eight injured from last match day are back. And another player has recovered: The first time it is too Eden Hazard back in the Los Blancos squad after his leg surgery in March. David Alaba and marcelo is still not quite in shape. Luka Modric gets forced break due to his fifth yellow card he received against Levante. As always, you can read about the other players and other information in our preliminary report.

HEL DU BIENVENIDOS! After beating Levante 6-0, Real Madrid are now up against Cádiz and nothing has changed with a focus on getting all players fit for Liverpool FC in the final of the Champions League. At the press conference, coach Carlo Ancelotti highlighted the most important factors for a successful match: “Concentration, dedication and intensity”. Cádiz, on the other hand, must try to take points from the favorites, as they did in the 0-0 victory in the first match. This time, if possible, three out of three – because it’s about staying up for the Andalusians. As always, you can watch the penultimate match day with us in REAL TOTAL– Follow live ticker or DAZN.

Ticker: Real come no further than a 1-1 draw against Cádiz

As in the first match, Real Madrid can go no further than a draw against FC Cádiz. The second match on the 37th match day ends 1-1 and was not a chance loss. But on both sides, the final consequence was ultimately lacking. Here is the RIGHT TOTAL live ticker to read.