OfficiallyIt has been discussed for a long time, now it is fixed. The UEFA Champions League, as we are used to it, will no longer exist in this form from the 2024/25 season. The group phase system is eliminated, four teams are added. Not surprisingly, the number of matches has increased as a result of the reform decided by UEFA’s executive committee.

32 teams, divided into eight preliminary round groups, each with four teams. Each team plays against each other in a row with a home and away match – that gives a total of six matches per club. The first and second place in a group qualifies for the round of 16, the third secures a place in the Europa League and the fourth is eliminated. That’s what football has been used to since the 2003/04 season. That’s changing now!

From the 2024/25 season, there will no longer be group games in the UEFA Champions League. What does it mean? The original 32 teams qualifying for the competition through their home leagues are growing: Four new teams are added, making a total of 36.

Since four teams cannot be divided into eight groups, the group system gives way to a league system. With one small limitation: not everyone plays against everyone. In the future, each club will play eight preliminary round matches, four of which are at home and four away. All 36 teams are listed in a single table, and the top eight qualify directly for the quarterfinals. The next 16 teams still have to play a knockout phase to reach the quarterfinals. The remaining twelve teams have been eliminated. However, the remaining knockout matches up to the last run as usual. The Europa League and Europa Conference League, which have been held since 2021, also adopt the so-called “Swiss system” in the preliminary round.

Four teams more and eight instead of six preliminary rounds. That means: Even more matches (189 instead of 125) that the clubs have to plan in their calendars (there will even be ten match days in total, even though the teams only play eight matches each), all this in addition to the national league leagues and cup competitions and national teams. Originally, UEFA even planned to play ten preliminary matches instead of eight, but both the national leagues and fan organizations called for the number of matches to be reduced again. Still, there must be room for the additional 64 games. The original Champions League break in January is therefore no longer valid from the 2024/25 season. After all: there will be no “Final Four” mode like 2020, the semifinals will remain as before. Still!

that #UEFAExCo has approved the final format and entry list for UEFA club competitions from the 2024/25 season.

No more access is given based on club coefficients.

Eight matches instead of ten in the new league phase.

Who gets the four extra seats?

The decision on the four new teams in the competition was very controversial, and UEFA’s plans were sharply criticized by, among others, the European Football Association European Leagues. What was UEFA doing? A big role should UEFA Five years of assessment games, which means two Champions League places have to go through the UEFA rankings for teams that miss out on qualifying for the top class through their domestic leagues. A big club that otherwise qualifies regularly, but falters for a season, can thus more easily get into the premier class, but it must be qualified for Europe (EL, ECL). A place in the Europa League can also become a springboard to the King’s Cup using the five-year rankings.

But what happens to the smaller clubs and smaller leagues while international top football is being played back in the cards? Right here it was crunch that eventually led to giving in. The compromise: Two places are given to the countries whose teams performed best in the previous Europa League season. The other two places go to the third country, which is number five on the UEFA rankings, and another national champion. In the case of the rankings, it would be France this season.

In 2022/23 and 2023/24, the premier class will continue as before with fewer teams and fewer matches – from 2024 it will change, as UEFA has now decided and also communicated. In two years, there will also be partial seeding guarantees for certain teams – one of the biggest criticisms in the Superliga plans. Since Florentino Pérez and Co. regularly confirmed that the Super League is still “on standby” be, she could still intervene and thus contest the UEFA plans, which are also controversial. 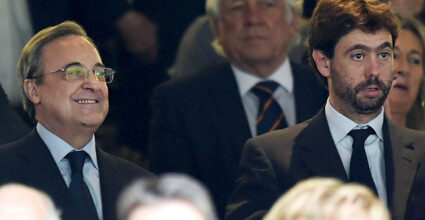 According to SPIEGEL, “dilapidated” clubs need to dig deep into their pockets. Keep reading

UEFA reform: the group stage of the Champions League has been canceled

It has been discussed for a long time, now it is fixed. The UEFA Champions League, as we are used to it, will no longer exist in this form from the 2024/25 season. The group phase system is eliminated, four teams are added. Not surprisingly, the number of matches has increased as a result of the reform decided by UEFA’s executive committee.