(Motorsport-Total.com) – After his accident in the third free practice session, alpine pilot Esteban Ocon was unable to qualify, so he had to start from the pit track at the Miami Grand Prix. From there, he managed to catch up with eighth place and earned Alpine’s only points of the day.

Esteban Ocon during the Miami race

“I’m very happy because today is like a victory for us,” Ocon said after the race in Florida. “We had a whole hill to climb, but I think everything from the strategy to the radio calls and the tire control was perfect today.”

He also stresses that he did not feel fit after the 51g crash on Saturday, after which he sharply criticized race director Niels Wittich: “Finally getting in points when you are only 50 percent physically is like a victory.”

“It was a big challenge because, as I said, it was not good for my physical condition, but I also struggled with the heat and the humidity. It was just as hard as Singapore.”

With a long first lap on the hard tires, he used the safety car phase at the end of the race to switch to the soft tires to save time. He could also benefit from the clash between Sebastian Vettel and Mick Schumacher and Fernando Alonso’s time penalty, which pushed the Frenchman to eighth place.

Photo gallery: Formula 1 2022 Miami: The most important thing on Sunday 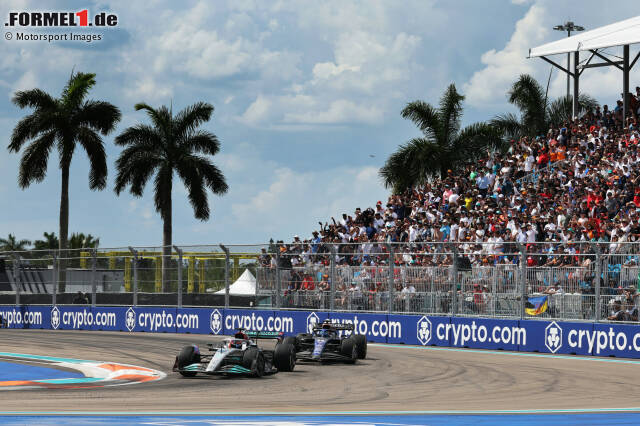 The most important facts about Formula 1 Sunday in Miami: who was fast, who was not and who surprised – all the information in this photo gallery!

“We knew what we were going to do,” Ocon says. “We wanted to drive a very long time with the hard tires, and because we wanted these tires to last a lot, I managed them a lot in the beginning.” At the start of the race he had trouble getting the temperature in the tires.

Ocon: After the crash “everything was broken”

“It was harder than expected. I thought the tires would never get hotter. Therefore we were not very fast in the beginning, but then I could set the pace slowly and we became very fast compared to the other cars,” analyzes the Frenchman .

The training crash on Saturday left a lot of damage not only on the Ocon, but also on the car: “I have to say a big thank you to the boys because everything in the car was broken yesterday. The seat was torn to pieces. The pedal unit is completely broken, the accelerator pedal , the brakes, everything is broken and of course the chassis too. “

When asked about his specific complaints as a result of the accident, he replies: “Mainly his knees, lower back and a few bruises here and there on his heels. It was 51g, so it made it quite painful.”

Ocon also witnessed the collision between Vettel and Schumacher at the end of the race as the three drivers battled each other. After the race, he talked about it with his friend Mick Schumacher in Parc Ferme, but does not suppose to make a clear assessment.

“Mick was on a 30-lap old tire, Sebastian was on a newer one, and I was on an even newer set of softer, so we all fought very close. Of course that kind of thing happens, but that’s not my place to comment.” said Ocon.

“We talked about it, but Mick knows exactly what to do. He’s a Formula One driver, has a lot of talent and therefore does not need my advice at all.” In addition, Ocon believes that the controversial track surface in Miami may have played its part.

“Before we got here, we heard that these rocks from Georgia are the best in the world, one of the best asphalt surfaces in the world. But it was a complete disaster because we could not overtake,” the alpine pilot complained.

“In part, Mick touched Sebastian because you could not attack on the inside, because if you go out of the race line, you lose half a second. So it does not work at all. We should walk on an asphalt like Jeddah, because I think it is perfect. “