(Motorsport-Total.com) – BMW juniors Max Hesse, Neil Verhagen and Daniel Harper, with the # 72 BMW M4 GT3 entered by the RMG team, competed in the first race of the 24-hour Nürburgring Qualifier 2022 on Saturday, the general test for the 50 edition of the 24-hour race, won.

In a new edition of the duel from the second round of the Nürburgring Endurance Series (NLS), the juniors won over Rowe-BMW # 99 (Eng / Farfus / Yelloly) and thus took revenge for the narrow defeat 14 days ago. # 4 GetSpeed ​​Mercedes (Angel / Gounon / Juncadella) completed the podium in third place.

# 72 RMG and # 99 Rowe, who had already fought an exciting duel for the victory at NLS2, also determined events from the front row in the first of the two 3-hour races. After the Rowe-BMW had originally led the race, Harper overtook Nick Yelloly in the second lap and withdrew from him.

As with NLS2, the duel was Rowe against RMG – with the opposite result zoom

As in NLS2, Hesse and Augusto Farfus met in the last stint, but this time the young German had the upper hand. Even a rainstorm shortly before the end of the race, which gave slippery conditions on the stretches from the Wehrseifen to Bergwerk, could not slow down the juniors.

The first job is done for today, and now of course we are thinking about tomorrow. We have another 3-hour race where we try to improve again and prepare well for the 24-hour race, “says Hesse.” In the last stint, it rained a little again. But the car continued to work well. We are very satisfied. “

Rain just before the end washes two Audis off the track

“It was hard in the end, with these showers coming and going. But in the end, I’m very happy to be back on the podium,” said Farfus, sporting defeat. “It’s very interesting for me to see the juniors win. It shows that BMW is doing an incredible job of helping the young guns become professionals.”

After the race started on a partially wet track, the track dried quickly before another shower swept in over the northern part of the track approximately 30 minutes before the end of the race. This washed two Audis off the track.

Car Collection Audi # 22 (Haase / Niederhauser), which was fourth at the time, hit first. Patric Niederhauser returned the hit car to the pit where it had to be parked. Shortly afterwards, Phoenix-Audi # 15 (K. van der Linde / D. Vanthoor / Vervisch) had an accident in the Ex-Mühle area.

Octane126-Ferrari # 26 (Grossmann / Trummer / Hirschi / Ludwig), who started from position four, was deprived of the chance of a top result due to an unplanned pit stop after the 3rd lap. After contacting the KCMG Porsche # 18, the left front tire slowly developed a flat tire. Due to the extra pit stop, the Swiss team just missed out on the top 10 in eleventh place.

In the first hour of the race, # 18 KCMG Porsche (Olsen / Burdon / Tandy / Bamber) with Dennis Olsen at the wheel showed a strong show. Starting from seventh on the net, the Norwegian had already improved to third on the second lap, chasing the two leading BMWs. About an hour before the end of the race, Josh Burdon collided with a rival at the entrance to the Nordschleife, severely damaging the rear right part of the Porsche. After the repair stop, # 18 dropped out of the top 50. 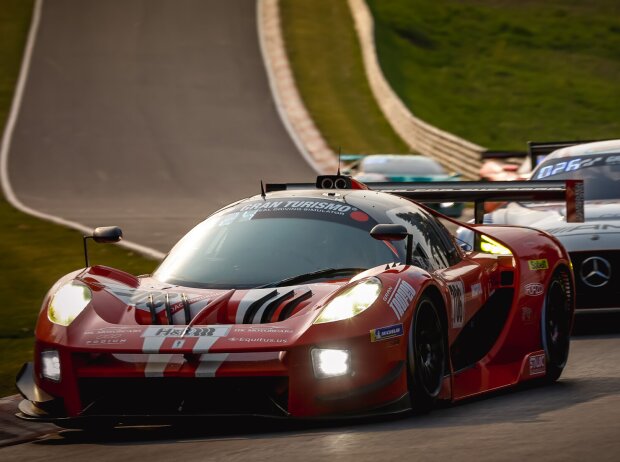 Glickenhaus SCG004c # 706 (Mutsch / Laser / Mailleux / Westbrook) fell hopelessly early due to gearbox problems. After four laps, Thomas Mutsch steered the American team’s car into the pit. “The shift is not working as it should. I had to use the clutch,” he says.

After changing the steering wheel, Richard Westbrook came on the track again, but returned to the pits after a short lap around the Grand Prix track. “The problem continues, we suspect it is the electrical system. But now we are looking at the race as a test,” the Briton said. In the end, the team finished in 81st place.

Falken-Porsche # 44 can not start after warming up

Falken-Porsche # 44 (Bachler / Kern / Picariello / Ragginger) could not participate in the race after an accident during the warm-up, but had to be ready to start again on Sunday. Unlike HRT-Mercedes # 12 (Stolz / Marciello / Metzger), which was withdrawn by Manuel Metzger in second qualification on Friday after a serious accident.

On Sunday, the program starts early at. 8.10 with heating. From kl. 9.15 follows the second top qualifier (in the livestream!) Where all vehicles can participate. The start of the second 3-hour race is at 14.00.