(Update May 5 at 5:30 p.m.): All three new LEGO Monkie Kid sets are now too in the LEGO online shop with all photos and prices quoted. So we now also know that the Monkie Kid news is cheaper than previously thought.

We have included the official photos below for you and added the prices that the sets are for from 1 June sold exclusively in the LEGO online shop. There is now also a lifestyle image for each set.

What do you think of the LEGO 80037 Dragon of the East? Do you like little Monkie Kid Wave or would you like to have a cheaper set for the theme world in June?

(Original post May 2): LEGO today unveiled the three upcoming LEGO Monkie Kid news expected to be released in June 2022 via the LEGO Instructions app along with official photos.

LEGO has now presented two of the three upcoming LEGO Monkie Kid sets with pictures, we have unfortunately only prepared a product description for one of them so far. 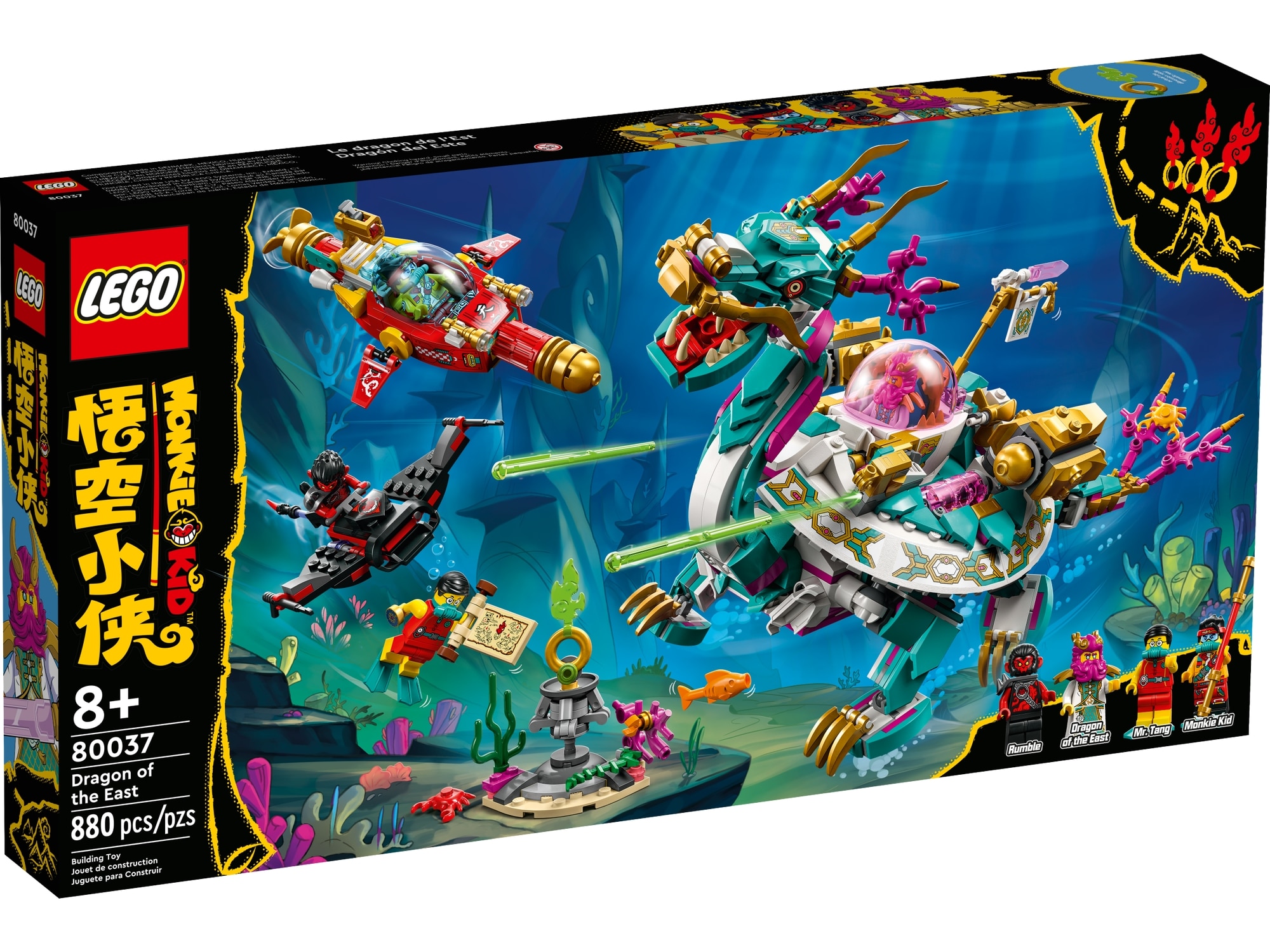 The smallest of the three novelties is the LEGO Monkie Kid 80037 Dragon of the East 880 parts. The set contains four minifigures and will to 59.99 euros available exclusively directly from LEGO. The kite is built in turquoise and has a small submarine on its back. Monkie Kid also has a rod-shaped underwater jet and is accompanied by Mr. Seaweed in diving equipment. 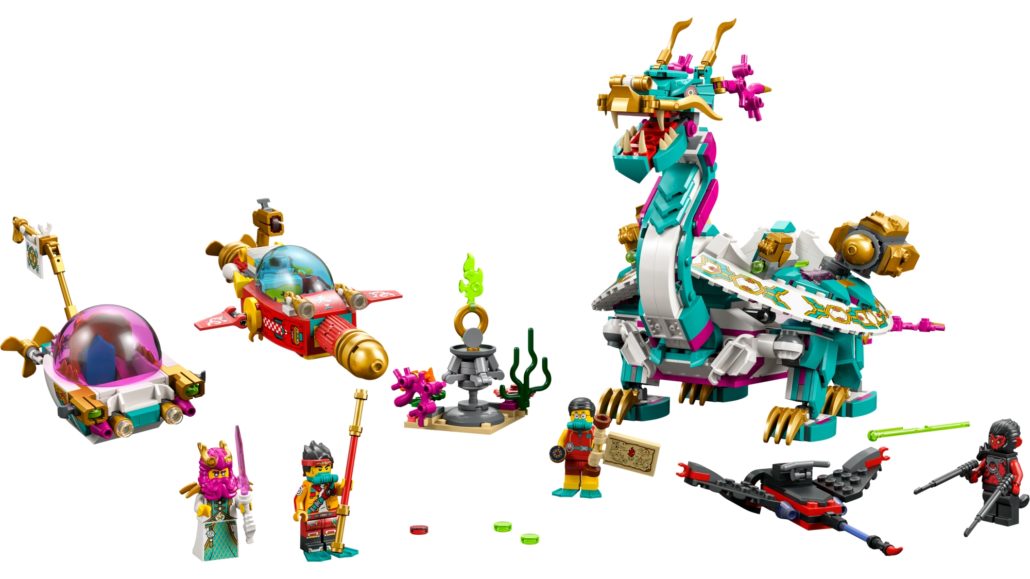 Help the dragon of the east to protect the green circle of fire! Check Mr. Seaweed short, dive into the depths of the ocean with the Monkie Kids submarine shaped like the golden rod. Fire the submarine and giant dragon shooters at Savage’s manta ray underwater jet. Attack the eastern dragon with the mini submarine’s knob shooters. It’s imperative that you prevent Savage from catching the barbell! 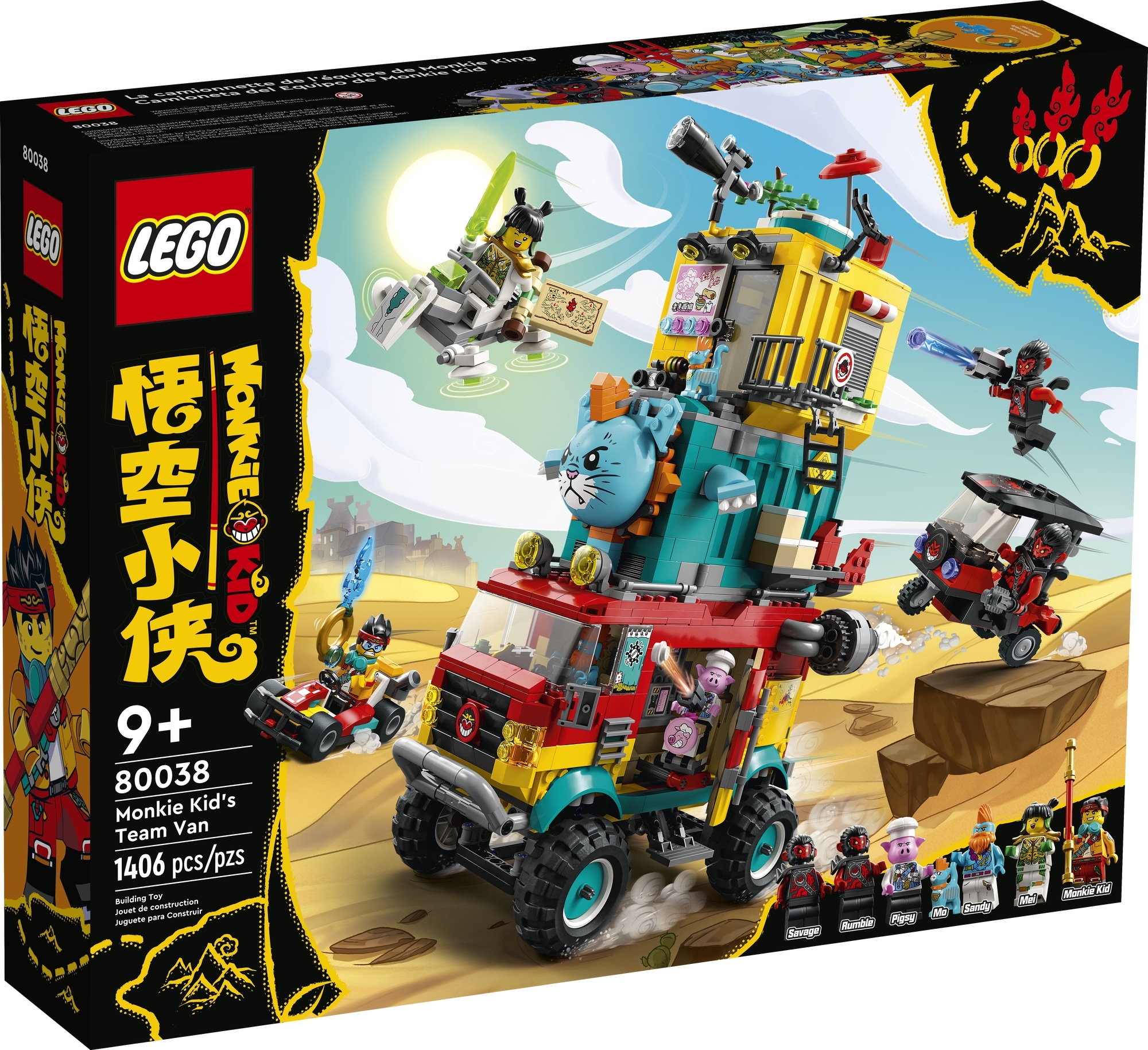 Monkie Kids team transports consist of 1406 parts and is expected to cost 129.99 euros exclusively for LEGO come for sale. is in the set 6 minifigures included: Sandy, Mei, Monkie Kid, Savage, Rumble and Pigsy. There’s also Sandy’s cat Mo. The set includes a multi-storey van that houses the Monkie Kids team headquarters. The upper floors can be removed and are designed to be hinged so that you can play with the interior.

More pictures can be found in the gallery:

Grab the blue fire hanger and escape from Savage and Rumble in Monkie Kids’ Team Transporter! Launch Pigsys dumpling blaster at Shadow Monkeys’ tuk-tuk. Send Monkie Kids go-kart and Meis dragon horse hovercraft. Rotate the paws on the Mo-shaped container to fire the knob slider. After the mission, let Pigsy make something delicious for you and relax at the slot machines and table tennis table! 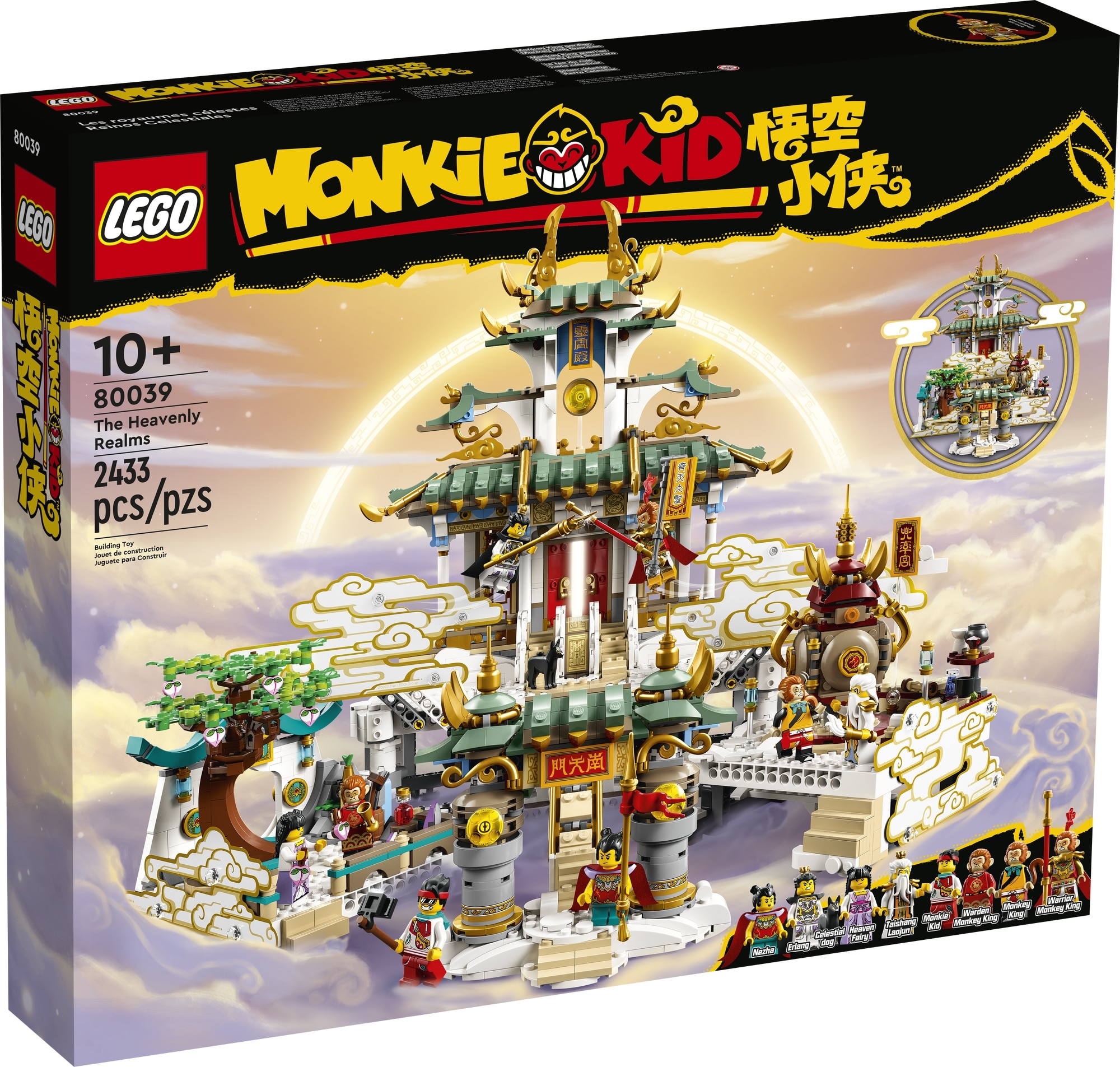 The absolute highlight of the LEGO Monkie Kid news is probably the kingdom of heaven with the set number 80039. The huge set consists of i.a. 2433 parts and will hit the market at a suggested retail price of probably 179.99 euros – too exclusively for LEGO. is in the set 8 minifigures Contains: Monkie Kid, Monkey King, Guardian Monkey King, Warrior Monkey King, Sky Fairy, Taishang Laojun, Nezha and Erlang. In addition, the “Sky Dog” is included as an animal.

The Kingdom of Heaven does not have to hide behind the series’ two previous highlights (Mountain of Flowers and Fruits and City of Lanterns) in terms of loving design. This set is also foldable, so it is easier to play with, but can also be displayed folded. The traditionally designed cloud elements hide the heavenly realms and slide aside to reveal the palace. In front of the actual palace is the entrance gate, which Erlang guards with his three forks. Also included in the palace is a tree on which the “Peach of Immortality” is located. In terms of color, the palace is special in white, gold and Sand Green designed. 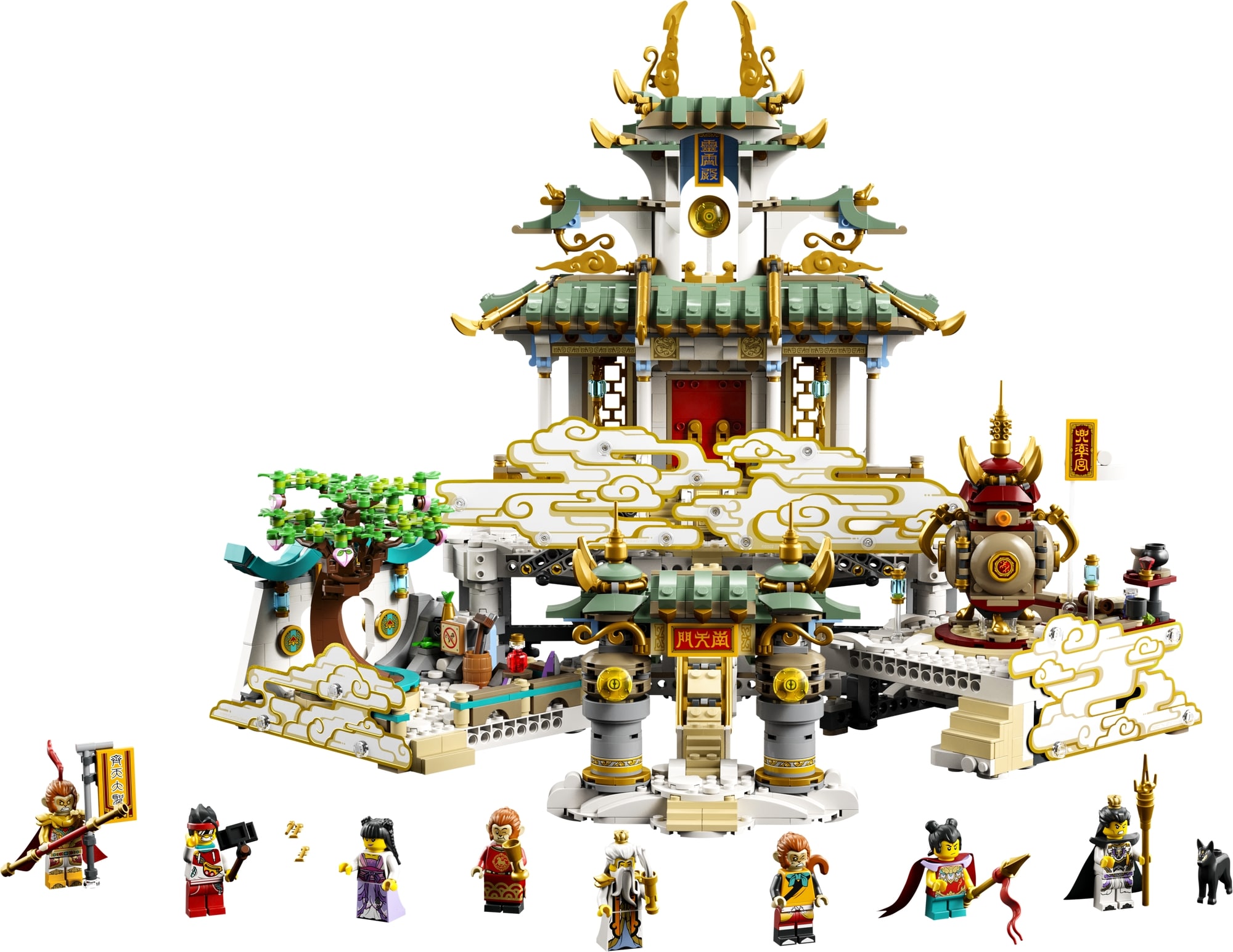 More pictures can be found in the gallery:

Take Monkie Kid on a trip to Heavenly Realms and learn about 3 legendary tales of the Monkey King. Step through the main gate and watch as the clouds clear and reveal the beautiful palace. Check out the air duels between Monkey King and Erlang. Witness Monkey King eating the peach of immortality and being put in an oven as punishment. But then he reappears with the Gold Look, stronger than ever!

All LEGO Monkie Kid sets from 2022

We have made a table overview of all LEGO Monkie Kid 2022 sets for you, which we keep updated.

What do you think of the three LEGO Monkie Kid sets? Are you also so excited about the kingdom of heaven? We look forward to your comments, so feel free to exchange views on the upcoming June news.