press conferenceIt’s incredible. Real “Remontada” Madrid is in the final of the UEFA Champions League. Again, the Blancos ignite their fire at the Bernabéu, and the opponents Manchester City end up empty-handed. “The most important thing was the psychological benefit,” said Carlo Ancelotti, who was also deeply grateful for his team’s performance and praised their fighting spirit: “They never give up.”

And it was turned on again: the magic at the Bernabeu that leads Real to the final– Photo: IMAGO / Pressinphoto

… His team’s race to catch up again and their place in the final against ManCity: “The world thought the game was lost. We gave everything. In these games you also need a little luck. The match was very competitive, but we kept our heads up. The game was much more complicated after Manchester City’s goal, but we sacrificed ourselves , we were lucky and we had the energy. I think the changes helped us a lot. It was an intense match, we played well and tried to push up. City did not play as usual because we tried to put pressure on, and it worked well. “

… The phenomenon of repeatedly catching up: “Yes, something very extraordinary happened. It was a fantastic evening. We played against very strong teams, teams that were originally swapped to win the Champions League: Chelsea, Paris Saint-Germain, Manchester City and with Liverpool next. For to explain it I do not know.I think it happens through the players and also through the fans.These fans always push us, not only in the stadium but also outside, even days before the matches.The weight of this jersey when first the players take it on also play a role. All of that has an impact. “

… The question of being the only manager with four Champions League titles and meeting Liverpool again: “The feeling I have is that I’m playing another final – playing for Liverpool against a team I’ve met many times: as a player in 1984 and as a manager. (with AC Milan) 2005 and 2007 and now again. I lived in Liverpool for two years, for me it’s like a derby because I’m still connected to Everton. “

… The crucial quality that keeps the team upright: “I think it’s because they never give up. This is something special. First of all, we have to thank the players for what they do. I can not thank them enough for what they do. Of course, the mood, the mood plays a role, but also the quality that the players bring. Rodrygo (Walks)when he comes in, is able to score twice, (Jesus) Vallejo plays only five minutes and wins all air duels. (Dani) Ceballos and (Marco) Asensio always sacrifices himself. No one, really no one believed that Real Madrid would play a Champions League final this year. But we are here. “

… the question of whether this strong CL season has secured the future of Eduardo Camavinga, Fede Valverde, Rodrygo or Vinícius Júnior: “I think so, but so must you (Luka) Modric, Toni Kroos and Casemiro played a fantastic match in the first 70 minutes. We tried to push up and we did it because of the amazing work of these sixty. I only made the changes to bring more energy to the pitch. With these players, the future of Real Madrid is secured because the three will continue, and next to them we have other young players with high quality. “

… Enlargement: “I think the mental aspect was the most important thing in overtime. If you turn the game around at the last minute, it makes sense that Manchester City will have a mental low. We got even more energy after Rodrygo’s second goal. All we had to do was defend ourselves well and stay in control, we already had the psychological advantage. “

FC Liverpool FC as opponents in the final and coach Jürgen Klopp: “I know Jürgen very well, he is a fantastic coach and I have met him many times. I have maximum respect for him, his coaching staff and his team. It will be a fantastic final with two teams with different characteristics. It will be a final between two very equal teams. “

The voices from Real’s “Remontada” 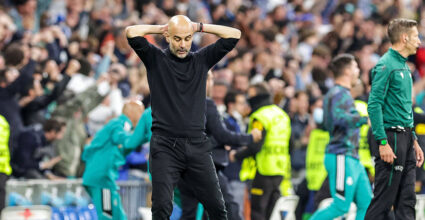 A discouraged Guardiola quarrels: “We did not show our best game” Continue reading 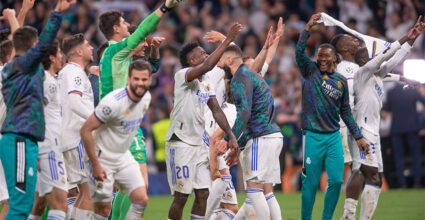 “We’ve been out 26 times”: Reactions to the insane victory over ManCity. Keep reading

Ancelotti on reaching the final: “I can not thank the team enough”

It’s incredible. Real “Remontada” Madrid is in the final of the UEFA Champions League. Again, the Blancos ignite their fire at the Bernabéu, and the opponents Manchester City end up empty-handed. “The most important thing was the psychological benefit,” said Carlo Ancelotti, who was also deeply grateful for his team’s performance and praised their fighting spirit: “They never give up.”