After just four races, there are indications that the 2022 World Cup will be decided in a duel between Max Verstappen and Charles Leclerc. Although both are still young, this duel has a long history.

It was on May 5, 2012 on the map course in Val D’Argenton, a place in the western French hinterland between Nantes and Poitiers, when two 14-year-olds named Max Verstappen and Charles Leclerc met for the first time. In one of the numerous heats in the KF2 class in the WSK Euro Series, it was about the best starting positions for the intermediate round, where the order for the grand final was then determined. So you could say there was not much at stake.

Both talents had already shown that they were among the favorites with victories in previous heats. Now they finally faced each other in a direct duel. If one is to believe the eyewitnesses, there was fierce battle on the completely wet track, which Verstappen won in the end. Leclerc proved to be a bad loser and pushed his opponent off the field and into the muddy meadow after crossing the finish line.

An Italian reporter then held a microphone in front of the noses of the two milk boys. Verstappen scolded enthusiastically: “I was in front, he pushed me and I held back. Then he pushed me off the field. It was not fair.” Leclerc gave the innocent lamb: “There was nothing. Just a little incident.”

It was not predictable at the time that the video on YouTube would garner nearly two million views almost 20 years later. Incidentally, the brawlers were removed from the rankings during the race, but were later allowed to participate in the final.

Verstappen now has 22 victories. Leclerc has only won four races.

Meanwhile, the two rivals, who were born just 16 days apart, have arrived at Formula 1. But the road to the top division of motorsport could not have been more different. Verstappen took a shortcut thanks to Red Bull support. Helmut Marko put the Dutchman in a Toro Rosso cockpit in 2015 after only 35 Formula 3 races.

Leclerc had to climb each step of the long junior ladder individually. Ferrari first accepted him at its junior academy in 2016. By Leclerc’s F1 debut with Sauber in 2018, Verstappen already had 60 Grand Prix starts and three victories. Meanwhile, the Red Bull driver also has the lead in the World Championship.

In the best class, the roads of the old kart opponents crossed quickly. In 2019, Leclerc was about to win its first GP in a Ferrari in Spielberg. But in the end, Verstappen pushed him off the field in the Remus basket and snatched the big trophy. FIA referees waived a penalty at Red Bull’s home game in front of thousands of Dutch fans.

Leclerc could clearly see the frustration on the podium afterwards. “If something like that is allowed, then I also adapt my driving style.” The Scuderia driver followed his words with deeds just two weeks later at Silverstone. This time it was Leclerc who won robustly over Verstappen and thus secured the last place on the podium. After the summer break, the then Vettel teammate finally celebrated his first two victories in Spa and Monza.

Then the duel fell asleep. Ferrari was rarely able to match the speed of Red Bull and Mercedes in 2020 and 2021. It was only now, after the introduction of the new race cars, that the duel between the two 24-year-old hotheads was revived. 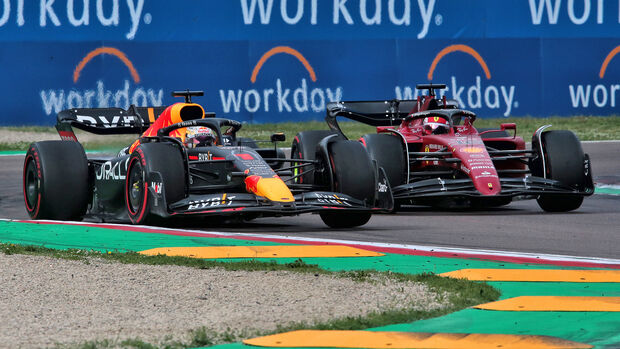 In Bahrain, in Jeddah and in Imola, there were direct duels on the slopes. Only in Melbourne did Leclerc fly alone at the top.

On three of the four race weekends, there were direct duels between the two drivers on the track. After victories, it is a two-to-two draw. Marko believes that the World Cup will ultimately be decided between the two spearheads: “The only pilot that I still see talented in this league is Lando Norris, but he does not have the best material at the moment.”

Of course, Leclerc and Verstappen are still regularly asked about their turbulent karting past. “Either he or I won, that’s how it was back then. That’s why we really hated each other at one point. The duel often did not end well. But today we can laugh at that,” Leclerc looks casually back at the old. days.

Both pilots confirm that mutual respect is now great. Nevertheless, one has to expect it to crash again at some point: “In the map, one could lean up against the opponent. We both did that often before. Unfortunately, that is no longer possible in Formula 1,” Verstappen said.

But no one wants to withdraw voluntarily: “We want to fight on the border of what is allowed, that has always been the case,” Leclerc clarifies. “It was tough in the first races, but fair to the letter. That’s how I like it when it’s clear where the boundaries are. That’s how it should be in every race. Hopefully our car will continue to be just as competitive . Will then be automatically coming to these duels. “

Verstappen now knows how to win a world championship in a direct duel. Although Leclerc is still a clear leader in the drivers’ position, many experts still consider him an outsider. There is already a winner – Formula 1 as a whole. Fans can look forward to another 19 duels between the superstars this year. Hopefully one of them does not end up in the mud again.