live tickerReal Madrid are Spanish champions! A draw would have been enough for Los Blancos against Espanyol Barcelona. In the end, it was a clear 4-0 victory. The RIGHT TOTAL live ticker to read.

FINAL! Real Madrid are Spanish champions! A draw would have been enough for the Royals on the 34th match day, but in the end it turned into a clear 4-0 home win against Espanyol Barcelona. Now the championship celebration continues. The important second match in the Champions League against Manchester City is on Wednesday (May 4).

86. It is well. The Laola wave passes through the Bernabéu.

85. Merida tries from a distance but the ball goes past the goal.

81. GOOOOOOOOOOOOOOOOOOOOOL DEL REAL MADRID! But it will count. Vinicius sprints into the penalty area, sees Benzema and the Frenchman score to make it 4-0 to Real.

80. Now Courtois can prove himself. The goalkeeper makes a strong save from Puado’s long shot.

74. Next move in Real Madrid: Camavinga and double-goal scorer Rodrygo are down, Vinicius Junior and Mario Gila, who make his pro debut for Los Blancos, are new to the game.

73. The goal is checked because Rodrygo was in Lopez’s field of vision when Isco shot and he was also offside. The goal does not count!

72. GOOOOOOOOOOOOOOOOOOOOOOOOOOOL DEL REAL MADRID! But now 4: 0! Isco sends Benzema on the journey with a nice pass, the Frenchman has his eye on the penalty area for Isco, whose shot was not placed, but still goes in goal. Lopez did not look good there.

71. Almost 4-0 to Real! Isco with a nice pass to Vazquez, whose shot on goal goes just past goal.

69. The Catalans keep trying on the outside, they also make deals, but there is always a Real player in between and prevent the goal from being locked in.

65. Espanyol are also making changes: Raul De Tomas and Vilhena are leaving, while Morlanes and Wu Lei are new to the game.

62. Vidal tries violence, Courtois reacts quickly and fends off the corner. The corner ball that follows poses no danger.

60. Triple substitution from Ancelotti: Isco, Kroos and Benzema come on for Modric, Mariano and Casemiro.

59. Party atmosphere at the Bernabeu. The fans are celebrating their team and are already preparing for the title celebration.

55. GOOOOOOOOOOOOOOOOOOOOOOOOOL DEL REAL MADRID! That’s the decision! Los Blancos counter via Camavinga, who shoots Asensio on the trip. The Spaniard scores 3-0 to Real.

49. Mariano directs a dangerous free kick to the top post. Espanyol comes out of the locker room a little more active.

46. Right at the start there is a yellow card to Casemiro after a hard tackle against De Tomas.

46 Continue. No changes on both sides.

HALF TIME! Real Madrid are on their way to celebrating their 35th championship today. Los Blancos are comfortably ahead of Espanyol after two goals from Rodrygo. The Catalans played well in the beginning, but do not have a chance against Los Blancos’ B-XI. We will return to you in the second half.

45. There is a three minute break.

43. GOOOOOOOOOOOOOOOOOOOOOOOOOL DEL REAL MADRID! An ugly blunder in Espanyol’s backline is coldly exploited by Rodrygo. Mariano wins the ball, the Brazilian takes the ball and scores to 2-0 to Blancos.

38. Espanyol’s defender Lopez had to be treated in the penalty area for a couple of minutes. But now it’s back.

33. GOOOOOOOOOOOOOOOOOOOOOOOOOL DEL REAL MADRID! Los Blancos leads 1-0 through Rodrygo. The youngster gets the ball from Marcelo, beats two opponents and does not give ex-Real goalkeeper Lopez a chance.

29. Marcelo tries it from just over 17 meters with the weak right foot, Espanyol goalkeeper Diego Lopez has the ball safely.

28. The game flattens out a bit. There are now many ball losses and bad passes on both sides.

22. At the other end, Modric sends in Mariano, whose header from a penalty kick just exceeds the goal.

21. Dangerous shot on goal from Darder, but Courtois is there and saves the ball.

18. Los Blancos has more ball possession and more of the game. Espanyol are deep and lurking for a counterattack.

13. Huge chance for Real! Ceballos sends the ball into the penalty area, Casemiro passes it on to Mariano with his head. The attacker also heads to goal and hits the post. Real is getting better and would like to have the opening goal here.

7. Now Espanyol comes dangerously ahead of Courtois’ goal. After a corner kick, the right goalkeeper has the ball safely.

3. Modric wins the ball and serves Mariano, whose shot is blocked in the penalty area at the last second.

1st kick-off at the Bernabeu! Real play the first half in the white jerseys from left to right.

First, tennis star Rafael Nadal is greeted at the stadium with standing ovations. The Spaniard gets kicked off in front of the cheering fans at the Bernabéu.

Both teams are ready. Then it finally starts.

TROPHY: The Spanish Football Federation RFEF officially announces that Real will be handed the league trophy if the worst happens. She would then be handed over to President Luis Rubiales, who was recently in the headlines because of his dealings with Gerard Piqué.

As expected, Ancelotti rotates sharply, with Carvajal, Mendy, Kroos, Valverde, Vinícius and Benzema, six regular players are rested. The eleven, where many reservists get their chance, then look like. Somewhat surprisingly, 36-year-old Modrić has been involved from the start.

TITLE PARTY? “We’re just thinking about the match, and if we have to celebrate, then we do. So far we have not organized anything, just prepared the match well.”, Ancelotti clarified ambiguously in advance. Means: When the record holder wins the 35th title, there will not only be festivities in the Bernabéu, but also the famous fountain on the Plaza de Cibeles already has some barriers, it should go here after the final whistle.

TOTAL BALANCE: To date, Real Madrid and Espanyol have met in 182 competitive matches. The Madrilenians won 108 times and their opponents from Barcelona 40 times. And 34 duels ended in a draw. Goal record: 390 to 205 for Real Madrid.

STAFF: In addition to the question of whether Real are already securing the championship today, there is another question: how much does Ancelotti rotate ahead of ManCity? The Italian has to improvise anyway! Because the coach stands alone in the squad on the defensive with Eder Militao, Nacho Fernandez and also David Alaba three key defenders does not for disposal. Missing in the attack Eden Hazard, Luka Jovic and Gareth Bale. Will Ancelotti not risk anything before the important match in the premier class and instead let a B-Elf play? As always, the likely lineup and other interesting information about the game can be found in our preliminary report. 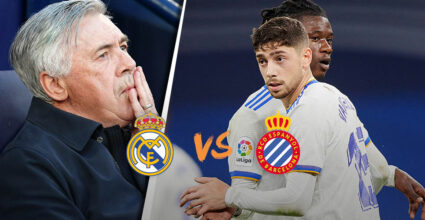 From 16.15: Real wants to become champions despite the decimated squad. Keep reading

HELLO BEENVENIDOS! Just one more point! A dot is missing real Madrid, to make the championship clear early. Can you do that on the 34th and fifth-to-last LaLiga match day? The Whites host a 13th place finish in the table Espanol Barcelona and are therefore particularly motivated to secure the championship title now – even a draw against the Catalans is enough. Warning: The promoted team had won the first match 2-1! Will coach Carlo Ancelotti’s team pass the dress rehearsal ahead of the Champions League semi-final’s second match against Manchester City and then have reason to celebrate? We know more from 16:15 when the match starts at the Estadio Santiago Bernabéu. The transmission takes over DAZN and as always, all information about the game can be found in REAL TOTAL– Live ticker.

Ticker: 4: 0 against Espanyol – Real is the Spanish champion!

Real Madrid are Spanish champions! A draw would have been enough for Los Blancos against Espanyol Barcelona. In the end, it was a clear 4-0 victory. The RIGHT TOTAL live ticker to read.