press conferenceWill Carlo Ancelotti be the first manager to win the league title in Spain, England, Italy, Germany and France on Saturday? The 62-year-old does not really bother to talk about it at the moment, although a draw against Espanyol Barcelona is enough for Real Madrid to win the LaLiga title. At the press conference before the 34th match day, the coach rarely gives an insight into his starting eleven thoughts. He also announced that David Alaba’s commitment to Manchester City remains questionable until Tuesday.

Following his return to Real, Ancelotti is about to win his second title – Photo: Real Madrid TV

… on the 34th match day against Espanyol Barcelona and the possible championship (Saturday at 16.15 in the REAL TOTAL live ticker and on DAZN): “It is not difficult to handle the situation. We are aware that we are very close to winning the title. But we must have points, because it is not over yet. We would like to close the bag tomorrow. So the team is very aware of the moment and the game we have to play. “

… the extent of the possible championship celebration between the Champions League semi-finals: “We did not think about how we should celebrate. We only think about tomorrow’s match, and if we have to celebrate, then we do. So far we have not organized anything, just prepared the match well.”

… Possible rotations in the league in light of the second match against Manchester City, breaks for Karim Benzema and Vinícius Júnior: “I think they can be put on the sidelines, but I agree that a player should play when they are well. At the moment, the team is in good health. If anyone needs one “Break tomorrow, I’ll give them one. Not because it’s an easy match, but because a player who’s not 100 percent recovered is at risk of injury.”

… The possibility that a regular player insists on playing against Espanyol: “I usually talk to the players about how they feel. Of course the player’s opinion is very important, but the final decision is made by the coach. I have not dealt with many players in my career, as before a match I was told that I should not put them up because they were tired.Of course a player would like to play, but there are other things to consider: the medical assessment, the physiotherapists treating the muscles, I have to consider all that and then make decisions.The player’s opinion is important, but not the most important. “

the championship is approaching 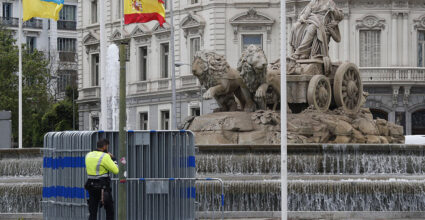 Real would celebrate the championship in Cibeles and probably get the trophy right away. Keep reading 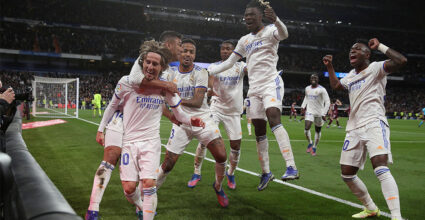 Blancos welcomes Espanyol: the second title of the season within reach. Keep reading

… His possible start XI against Espanyol: “We have problems on the defensive, I have (David) Alaba, Nacho (Fernandez) and (Eder) Militao not. So I have to (Jesus) Line up Vallejo, who has played very little, but like Marcelo is a very serious professional and has always worked. Then I have to pick another center-back who could be Casemiro. I have many opportunities in midfield because everyone has recovered very well. But I have fresh players who did very well against Osasuna, e.g. (Eduardo) Camavinga or Dani Ceballos. In attack, I have to consider Asensio playing a good season and being fresh, and let’s see if Karim can play from the start. I want to put a team to win. I have to prevent a tired player from getting injured. ”

… His upcoming achievement of having won the championship in all five top divisions: “I understand that question, but I have to be honest, I do not like to talk about it, because I have not gotten there yet. I am a little superstitious, like almost all Italians and also some Spaniards. If I am allowed, I will answer like on it when that time comes ’.

… Real’s good situation with a lead of 15 points with five games left: “No one would have thought we would be 15 points ahead at this point in the season. The team has done very well so far. We won many away games, won in difficult stadiums. That made the difference. “

… possible relaxation in the team due to the almost certain championship: “I do not think so, because the title is so close that there is not a moment of relaxation. We are still one point away, but we must remember to prepare the match as best we can and win. We have a match point, and when the big tennis players have a match point, they also win. ”

… The season in the assessment: “I am really satisfied with the work. For me, it was a very easy, not a difficult season. I have the full support of the club and the players who have made all my decisions with a lot of professionalism. “

… Alaba and his open use against Man City: “Alaba has the same problem as before the match against City, complaints in the adductor area. I do not yet know if Alaba can play on Wednesday. We have to wait until Tuesday. “

… Marcelo and his role on the team despite being a reserve player: “What I can highlight about Marcelo is that he has suffered as a player because he has not played many matches, but he is still a fantastic professional. He feels the importance of being captain of this team, shows a high level of professionalism, coaches very well, is always close to the team.He is a perfect captain.Not only he but also many others would have deserved more minutes, but it is football.Every time he is posted, he has done his job “And he will do the same in the next matches. I have great respect for him as a person and also as a player. Hopefully everyone will celebrate being the player with the most titles.”

… Casemiro and his lack of backup for the upcoming transfer summer: “No, we do not need reinforcements in this position, because we already have them in this squad. If (Tony) Kroos, about Camavinga, about Ceballos. Many can play in this position. For me, Kroos can play there. Everyone forgets: Kroos played the second half against Sevilla as six.

… Son and Assistant Davide: “Davide is a very competent, serious, professional and calm assistant. Another assistant works with him that no one talks about: Francesco Mauri. You are very young. We have a young coaching team. I must also highlight the work of Luis (Llopis) appeared with the goalkeepers, Antonio Pintus in physical terms. The staff is young and enthusiastic, very competent. We combine the enthusiasm with my experience well. It’s hard for me to talk about it, because for me there is also the emotional, the familial aspect. I helped Davide show that he is not here because he is my son. He is here because he is competent and can become a very good coach in the future. “

… The achieved goal of scoring more goals: “I had the belief that I know the players very well (Benzema) does an amazing job, scoring his goals, Vinícius (Junior) has also improved, Asensio has often scored. We had some hits from (Luke) Modrić and Toni, Casemiro scored the important goal against Getafe. Alaba scored goals. The offensive work was good. We had periods of very good defensive work, but the attacking work was very consistent – thanks to Karim, Vinícius and also Rodrygo (Walks), who did not score often but made the difference in many matches. It is very important.”

… Mauricio Pochettino’s statement that he still sees Kylian Mbappé 100 percent in Paris Saint-Germain: “Coaches for press conferences – I can not tell the whole truth, it is quite normal (laughs). All Madridists are thinking of two things right now: wind tomorrow and wind on Wednesday. ”

Will Carlo Ancelotti be the first manager to win the league title in Spain, England, Italy, Germany and France on Saturday? The 62-year-old does not really bother to talk about it at the moment, although a draw against Espanyol Barcelona is enough for Real Madrid to win the LaLiga title. At the press conference before the 34th match day, the coach rarely gives an insight into his starting eleven thoughts. He also announced that David Alaba’s commitment to Manchester City remains questionable until Tuesday.