Do you really want to burn some calories using your Switch, but you absolutely can not find a version of Ring Fit Adventure, and you like it a bit combative during sports? Then Knockout Home Fitness could help.

In this mix of rhythm games and training program, you should perform various martial arts techniques in time with the music and be kept on track with motivating statistics and unlockable bonuses. So how are you?

In a short tutorial, your (German voice) trainer Satsuki welcomes you and explains the simple game principle: in time with the music, red and blue circles appear on the screen, which you must hit with the appropriate technique. Actions range from simple punches (jabs) and kicks to evasive maneuvers and defensive positions.

Recommended editorial contentThis is where you will find external content from [PLATTFORM]. To protect your personal data, external integrations will only be displayed if you confirm this by clicking on “Load all external content”:I consent to external content being displayed to me. Personal information is thus transferred to third-party platforms. Read more about our privacy policy.


The rhythm game core would have benefited from a more intuitive design. It is difficult to distinguish between the movements quickly because the circle design is always the same.

However, the game does not tell you what action to take using an intuitive symbol, only text on the circles – and reading this well in advance can be difficult, especially in the beginning, given the high game speed that can not be set separately.

Additionally, it may take a while before you can reliably perform the actions with your right hand: The symbols appear for both hands on the left half of the screen and differ only in red and blue semicircles. The similarly equipped Fitness Boxing solves this a little more intuitively with easily recognizable icons running left and right across the screen. 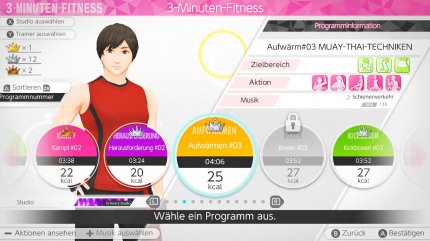 The bulk of the game consists of 3-minute mode where you play short workouts. Here you can also see which part of the body is being used.

But if you manage it after a while and a little frustration, a nice flow can develop while you play, which is definitely fun and thanks to the fast sequences of movements makes you sweat a lot – depending on your current condition , of course.

If you really want to work out, you can increase the length of your daily random workout to 20 or 30 minutes or tighten ankle weights on your arms. Speaking of arms: Since you only work with the two joycons in each hand in the game, only arm movements are registered. The game automatically marks moves with the legs as a direct hit. 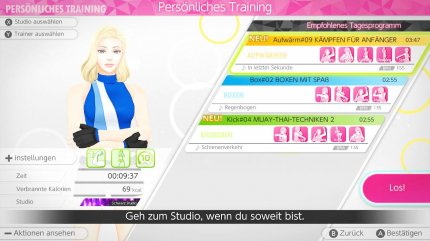 The daily complex, personal training takes into account which part of the body you want to train and how hard and strenuous the exercises should be.

Knockout will hardly make you a professional martial arts artist anyway: the many techniques are only explained to you with short texts and choppy test animations. Whether you’re floating through the living room like Muhammad Ali’s missing child, or are just overmotivated to work towards a damaged joint, you’ll hardly find out at Knockout Home Fitness.

This is due not only to the poor explanations, but above all to the fact that the game does not recognize the necessary techniques at all. Every Knockout Home Fitness check shakes the right joycon at the right time. You need to take the necessary discipline with you to actually perform the necessary movements!

But once you understand when the game counts hit, the detection is decent enough and rarely makes mistakes.

The fact that the program is extremely spartan in terms of scope, features and unlockable is not exactly conducive to discipline and motivation. Most of the unlockable content is a decent list of workout programs that you can play in the 3-minute workout after watching them in the randomized daily workout.

Outside of the two training modes, there is almost nothing to see: no mini-games, no customization of your four coaches, only three backgrounds and a few background tunes. You will not find a multiplayer mode. After all, you can decide the body area you want to train and choose between building muscle, staying in shape and losing weight.

You can also enter your weight and height, which the game then uses to determine calorie consumption per workout and record it in statistics over time. Because of the almost non-existent recognition of your movements and the intensity with which you perform them, these numbers are obviously anything but meaningful.

Just fine as a simple training program, rather weak as a game.

Gamification is probably the best way to make a daily workout appealing to me. The spiritual role model Fitness Boxing managed to do this surprisingly well for a while with a slowly increasing challenge and trivial but numerous unlockable. Knockout Home Fitness requires several different techniques from me, but with its sparse scope, it gets boring much faster. The game also does a pretty bad job of teaching me its moves, announcing them in a meaningful way, and increasing the level in an understandable way. Therefore, I am somewhat exhausted after the daily training, but I do not necessarily look forward to the next session with enthusiasm. So Knockout fulfills its purpose as a simple, fast training program, but here hardly anything is offered on a playful level.

The rhythm game core would have benefited from a more intuitive design. It is difficult to distinguish between the movements quickly because the circle design is always the same. [Quelle: PC Games]

Would you rather play comfortably with the socket on the sofa? See our PCGH Nintendo Switch Guide for our top 10 games.