The Ferrari home game in Imola was reminiscent of the Australian GP. Only with reverse role distribution. Red Bull set the tone at Emilia Romagna’s Grand Prix. For the challenger could or did pretty much anything better than the home team. Red Bull was the faster car, it was better balanced and a little nicer for the tires.

Max Verstappen and Sergio Perez made fewer mistakes than their Ferrari counterparts. In the beginning, in a duel, in the fastest laps. And Red Bull’s command post responded correctly to everything Ferrari came up with. Charles Leclerc’s second pit stop was not a mistake in itself. He just came at the wrong time. Two laps later would have had the same effect, only without the risk of falling behind Lando Norris.

At Ferrari, the timing of the pit stop was not quite right.

Ferrari’s move had nothing to do with the extra point for the fastest lap. The pit stop in the 49th round came too soon. Max Verstappen could have reacted safely at any time with a lead of 16.2 seconds over Leclerc. The switch to soft tires was also not a reaction to tire problems that had cost the world championship driver victory in the sprint. “The tires were fine. We just did not see a chance to get past Perez in the normal way,” said Ferrari team manager Mattia Binotto.

In the 48th lap, Leclerc was 2.7 seconds down on the man in second place. After an intermediate sprint, he had reduced the hole by four tenths and was thus back in Perez’s undercutting window. Still, Ferrari did not have to worry that Red Bull would anticipate an underbid.

From Perez ‘point of view, the risk of throwing second place was too great. Leclerc would have fallen next to it, and he should then have had to fill 28 seconds on Ferrari in 14 laps. A hopeless endeavor. Perez took just 18 seconds from Lando Norris in those 14 laps despite fresh soft tires.

Ferrari did not need to be in a hurry. The strategists took advantage of the first moment Norris on paper disappeared from Leclerc’s pitstop window. On lap 48, the season’s two-time winner was 27.4 seconds ahead of McLaren. Two laps later it would have been almost 29 seconds. Leclerc was six tenths per lap faster than Norris at the time. 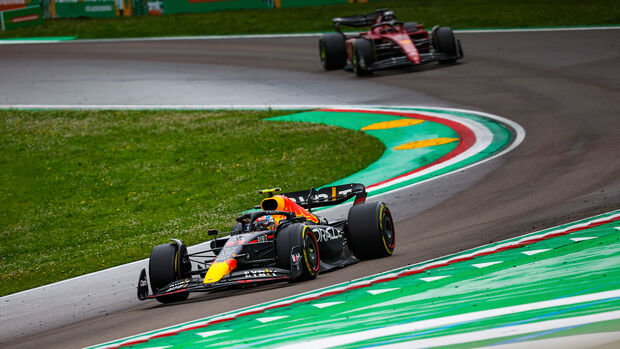 With a pit stop of lap 51, Leclerc would have returned to the race with a mediocre pit stop ahead of Norris. If Red Bull had not responded with Perez, second place would have been lost anyway. Even with a pit stop two laps earlier. In any case, the remaining distance was too short to cover the time of a pit stop with the soft tires.

Red Bull immediately did what Ferrari had hoped. They brought Perez into the pit a lap later. If Leclerc had not had Norris’ McLaren in front of him, it would have been dangerous for Perez. In the warm-up phase, he would have been vulnerable to an attack from his opponent. Leclerc only had to catch up in the Red Bulls DRS area before the Rivazza curve.

To try to cope with it somehow, the Ferrari driver spun off the track. Red Bull team manager Christian Horner saw the action as follows: “The Alta variant was the only curve where Ferrari was significantly faster than us. Therefore, Charles had to risk everything there to catch up with Checo.” 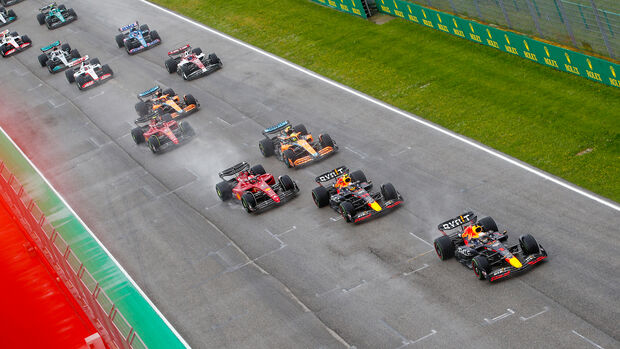 A bad start threw Leclerc behind Perez and Norris’ McLaren.

Ferrari’s defeat was actually sealed in the sprint. Leclerc lost the lead two laps from the end because his right front tire began to grain earlier than his World Cup rival. It was the reverse of Melbourne. This time, Red Bull found the better car balance. The aerodynamic upgrade and reduction of the weight disadvantage compared to the Ferrari gave Red Bull the small edge that put them in a position of strength in car setup.

The bad starts of the Ferrari drivers in the main race gave Verstappen another ball. Now he had Perez in the back as a male marker. Carlos Sainz failed to help Leclerc. As in Q2, the Spaniard ended up in the gravel trap. This time without his own fault. Sainz also did not get off to a good start in the beginning.

Binotto pushed it to the grate on the right side of the road, which was wetter than the left. In hindsight, one could also argue that if Leclerc had defended the lead in the sprint and if Sainz had not started so far behind due to his mistake on Friday, both could have started on the better side. 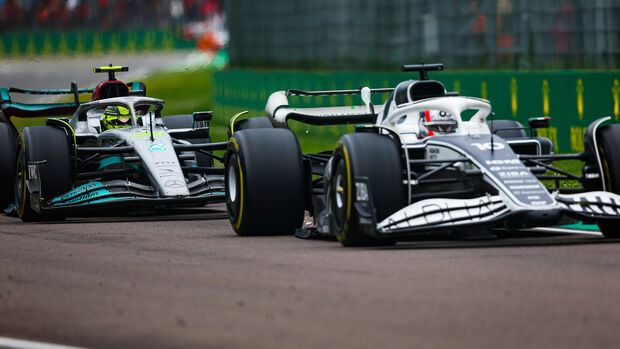 In the hunting field, two moments determined the order. The start and time of pit stop of Intermediates on medium-sized tires. The winners at the start were Kevin Magnussen, George Russell, Sebastian Vettel, Yuki Tsunoda, Lance Stroll and Esteban Ocon. Carlos Sainz, Daniel Ricciardo and Lewis Hamilton lost. Of the winners of the first round, only Magnussen failed to keep his place. The Haas driver lost four positions on the track and one through the pit stop.

The change to the medium-sized tires took place within three laps. Daniel Ricciardo started on lap 17. Vettel said the Australian got the right lap but he could afford to take the risk as he was last in the field. Vettel was the next at the tire service and made a place against Magnussen, which was a game later.

Pierre Gasly battled with Vettel and also made a position. But only because Hamilton stood 4.6 seconds until the new tires were on the car and Alpine sent Esteban Ocon over to his lane as he drove out of the pit. The Mercedes driver lost four positions with the late stop and then got stuck in a DRS train behind Alexander Albon and Pierre Gasly in 44 laps from which there was no escape.

Mercedes strategists later regretted not being able to convince Hamilton to stop at the same lap as Ricciardo. “Lewis said it was still too wet. We should have insisted more. It would have given him two seats and he would not have ended up on the DRS train.” 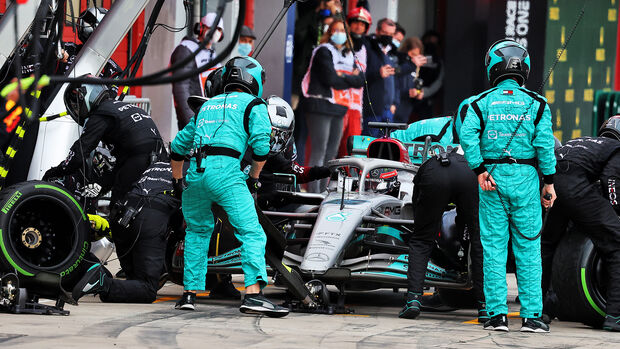 When changing tires, Mercedes did not manage to change the front wing to the slippery tires.

The pit stop also went wrong for George Russell. The mechanism used to adjust the forefinger flap to dry tires did not work because the mechanics got in each other’s way. The Englishman struggled with understeer for the rest of the race. “It cost us two-tenths per lap, and the podium against Norris and Bottas played into his claws,” the engineers explained, not giving in to praise: “Under the circumstances, it was an excellent performance by George.”

From Mercedes’ point of view, it was also clear where the problem lay in Imola. “We blew up our chances in Q2 because we were not able to burn the tires quickly and did not get the chance to run several laps in a row due to the red flags.”

Also at Alfa-Sauber there was every reason to use subjunctive after the race. Valtteri Bottas lost 11.8 seconds during the pit stop because the front right wheel nut got stuck. The Finn did not lose a place, but important running time. The accident increased the distance to George Russell from 1.4 to 11.5 seconds. It took 35 laps before the distance to the Mercedes was closed again. “If Valtteri had run up to Russell earlier, he would have overtaken him,” says sports director Beat Zehnder with conviction. “Valtteri was temporarily the fastest on the medium-sized tires.” 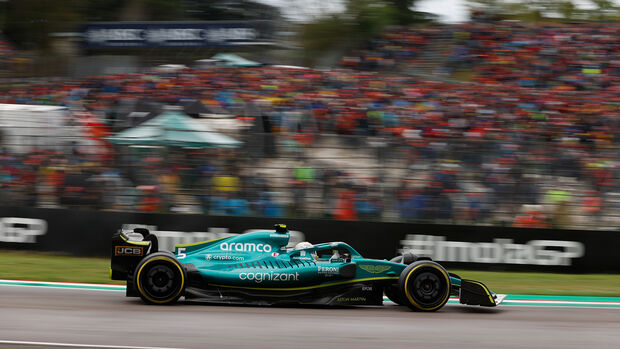 Sebastian Vettel got the most out of his Aston Martin AMR22 in eighth place.

Vettel laid the foundation on a wet track

After the switch to slicks, Sebastian Vettel had to draw on the foundation he had built up in the wet phase. After the pit stops, the Aston Martin driver was in seventh place and had enough air on colleagues in potentially faster cars to stay in the points: 5.1 seconds on Kevin Magnussen, 9.7 seconds on Yuki Tsunoda. The group around teammate Lance Stroll was already 10.5 seconds behind. Vettel did not have to worry about that as long as Stroll was able to keep his pursuers behind him.

Vettel spoke of a “struggle for survival”. At Magnussen, he retained 4.3 seconds of his lead. He had no chance against Tsunoda. Under the same conditions, the Alpha Tauri is the faster car. Tsunoda’s fastest lap was 0.7 seconds from Vettel’s best. And yet there was no herb against Leclerc’s late attack.