(Motorsport-Total.com) – If victory, pole position, fastest lap and leading every lap is a Grand Slam, then what has Max Verstappen achieved at Imola? The Dutchman not only managed the Grand Slam, but also won the sprint race. It has never happened before.

It could hardly have gone better for Max Verstappen in Imola

After the very close success against Charles Leclerc on Saturday, the Red Bull driver had clear control of it all on Sunday. Verstappen won at the wet start and drove the race safely home in front of teammate Sergio Perez. The world champion even managed to switch from intermediates to slicks without any problems.

“I did not expect it to go like this, but such a weekend is of course fantastic,” says Verstappen, who not only scored the maximum number of points with 34 points, but also the third most of a driver on a weekend – only topped by Lewis Hamilton (50) and Felipe Massa (36) at the “Abu Double” final with double points in 2014.

“We made no mistakes and made the right decisions when we switched from intermediates to slicks. And from then on, we just controlled the race,” said Verstappen, pleased with Sunday’s performance. “We saw yesterday in the sprint that we have a good pace in the car and that we could take care of the tires. A very positive weekend.”

But it was not quite as easy as it looked in the car, he emphasizes. For despite the superb ride, there were a few sticking points. For example, there was the start that did not go well on Saturday. But in the Grand Prix, it was the main competitor Leclerc who did not get off to a good start, while Verstappen was the first to go safely into the first corner.

The clutch was not repaired after the bad start in the sprint: “We simply had poor execution of processes and did better today,” he says. “There’s still room for improvement, but it’s always a little unclear in the wet. Last year I had a good start, which is not always so easy to do in the wet.”

And even when the race was over, the Red Bull driver had to be on guard. For especially those who were shot would not have made life easy for him. “Of course some stayed on the ideal line and I had to overtake them in the wet. It was not great,” he says. “It’s very easy to brake and drive off the track if you get off the line and go through a wet place.”

But Verstappen remained cold and only had to react to what Leclerc did in the latter part of the race. Monegasse hit a second time to get new soft tires. Although Verstappen says that he could have run through in the media, as a leader you naturally take advantage of such an opportunity to change tires.

Photo gallery: Formula 1 2022 Imola: The most important thing on Sunday 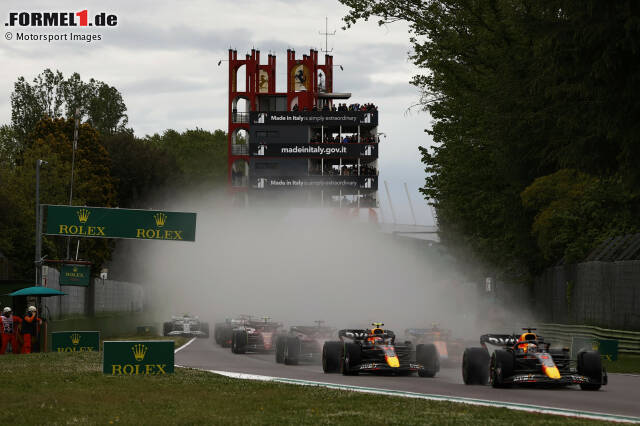 The most important facts about Formula 1 Sunday in Imola: Who was fast, who was not and who surprised – all the information in this photo gallery!

“I only heard that the two behind me were getting into the pit, so I asked if I could have new tires too. But at least that was the plan,” he says. “Of course it’s always nicer to drive on new tires than on the old ones. I would have reached the last one, but it’s not that nice.”

After 63 laps, Verstappen finally crossed the finish line as the winner and got his second victory of the season. Thanks to the Ferrari driver’s late mistake, he was able to get a total of 19 points on Leclerc and move up to 27 points in the championship lead.

“It’s happening fast,” he says of Leclerc’s mistake. “He pressed hard to fight ‘Checo’. It hurts, but he knows it himself. He does not need to hear that from anyone here.”

Nevertheless, it was an important success for Verstappen after the mixed start. “Obviously Melbourne was not great for us and the start was generally not so great,” he said, “so we needed a good weekend.”