Ashtanga yoga is not only the origin of all yoga styles that are popular today, but is also considered to be particularly demanding. Nevertheless, anyone can practice the movement sequences.

Sweating bodies, rushing breathing and dynamic movement sequences – Ashtanga is considered a challenging and strenuous practice and is often referred to as the toughest of the yoga styles. A prejudice, says Ronald Steiner. The sports doctor has been teaching Ashtanga yoga for over 25 years and is convinced that the practice is accessible to everyone.

Has nothing to do with the esoteric: That’s why yoga makes you so fit – and can be used anywhere

Ashtanga yoga originated in 1924 and was conceived by the yoga guru Krishnamacharya in the Indian city of Mysore. Before that, yoga was exclusively a meditation and breathing practice. Krishnamacharya was the first to integrate the physical exercises – “all the asanas that we know so characteristic of yoga today” – into practice.

Ashtanga yoga has an influence from gymnastics

Well-known positions such as the triangle or the warrior became part of yoga for the first time. On the one hand, Krishnamacharya was inspired by existing yoga exercises and on the other hand by a Danish fitness movement, the Bukh gymnastics, which had even been practiced by the English military.

The practice has changed, but the goal in yoga has always been the same: “It was and still is about experiencing a meditative state,” Ronald Steiner emphasizes in an interview with star. To achieve this, Ashtanga yoga is based on three pillars. The basis of the practice is called Tristhana and describes a “breath-controlled, moving meditation,” the expert explains.

Dr. Ronald Steiner has been teaching Ashtanga yoga for more than 25 years and even trains teachers

The breath sets the rhythm. Students must enter into the so-called Ujjayi spirit. You breathe silently in through your nose and exhale through your narrowed throat with a slight roaring sound. On this beat “we move the body, direct the energy and change our views,” the yoga teacher explains. In this interaction, the phenomenon of synchronicity occurs in the brain. “It triggers the meditative state.”

Ashtanga as the origin of popular yoga styles

The idea of ​​Tristhana – the breath as the basis of a meditative flow of movement – has been adopted by almost all modern yoga styles. Therefore, Ashtanga is also considered as the origin of all styles that are popular today, from Vinyasa Yoga to Power Yoga and Bikram Yoga.

Unlike these types of yoga, Ashtanga students perform the same sequence of movements over and over again. This distinguishes practice from all other styles. Traditionally, there are four series in Ashtanga, which consist of individual positions, asanas. These are each held for five breaths and chained together in a fluid motion.

Yoga for more strength and power: bet these exercises will make you sweat? 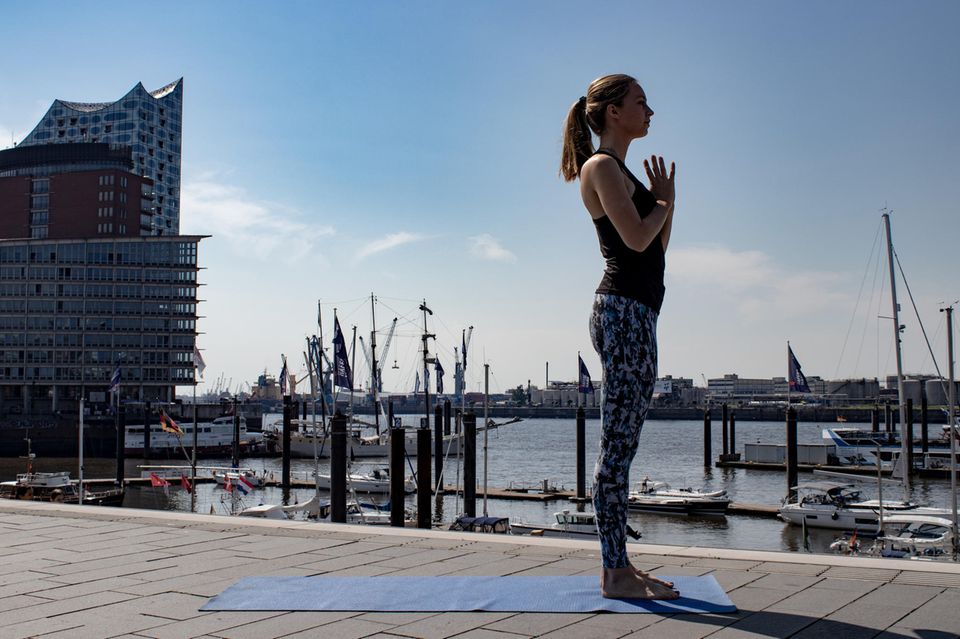 And this is how the famous sun salutation in yoga goes:
Stand upright with your feet hip-width apart, inhale as you stretch your hands in front of your heart. Activate your core and roll your shoulders back. Breathe out calmly and in a controlled manner. This exercise is for internal assembly. Prepare internally for your yoga session, get on your mat first. Feeling and perception are announced – now nothing is more important than you and this time for you.

Students must learn the processes as quickly as possible and be able to perform them independently. “If we do not know the order exactly, we should always look at a cheat sheet or wait for the teacher’s announcement and can never get the interplay between breathing, movement, energy and gaze control so synchronous,” says the sports medicine specialist. .

Ashtanga yoga must be tailored to the individual

The third feature of Ashtanga yoga is the teaching of the so-called Mysore style. The lessons are characterized by each student performing the processes independently in their breathing rhythm. The teacher does not come with advertising in front of the class, but helps individually. “Everyone learns the exercise sequence individually and piecemeal,” says the yoga teacher. Therefore, Ashtanga is also suitable for people of all ages and also for yoga beginners. “All you need is an experienced teacher to help you tailor the series to your own body.”

In his eyes, the cliché about Ashtanga as a physically demanding practice is due “to the fact that it is unfortunately often poorly taught”. The majority of educators follow a military teaching style that urges students through exercises regardless of their body. A gross mistake, says Ronald Steiner. On the one hand, it excludes a large number of people from practice, and on the other hand, it increases the risk of injury.

It is important that the exercises are individually tailored to the respective body. “Then everyone can train Ashtanga, even if they have an injury or a disability.” Ashtanga, however, is a tough yoga style on another level. “The practice is aimed at people who want to dive deep into yoga and practice it almost every day,” explains the sports doctor. He describes the practice as an “extremely powerful and incredibly direct method of practice for experiencing a meditative state.”

Ashtanga practices should be individualized to each body, believes Dr. Ronald Steiner

The target group in Ashtanga yoga is people who want to practice independently and disciplined. “It just requires more seriousness.” According to Steiner, once you know the movement sequences and have built up a solid basic exercise with the help of a teacher, you can practice at home without any problems. That is even the stated goal of practice. “Still, it makes sense to practice with someone from time to time, but the basic practice takes place on your own mat.”

Ashtanga yoga as a living tradition

Those who dedicate themselves to the practice and practice it regularly can not only experience a meditative state during yoga, but also find more harmony and balance in everyday life. This applies to both the mind and the body, which gain more strength, endurance and agility through training.

Steiner describes Krishnamacharya’s idea of ​​involving the body in meditative practice as “ingenious”. However, it is important for the sports doctor to see Ashtanga as a living tradition that is constantly evolving. He passes on his philosophy of combining the original yoga with modern, movement physiological aspects to students and other Ashtanga teachers in several training and further education centers.